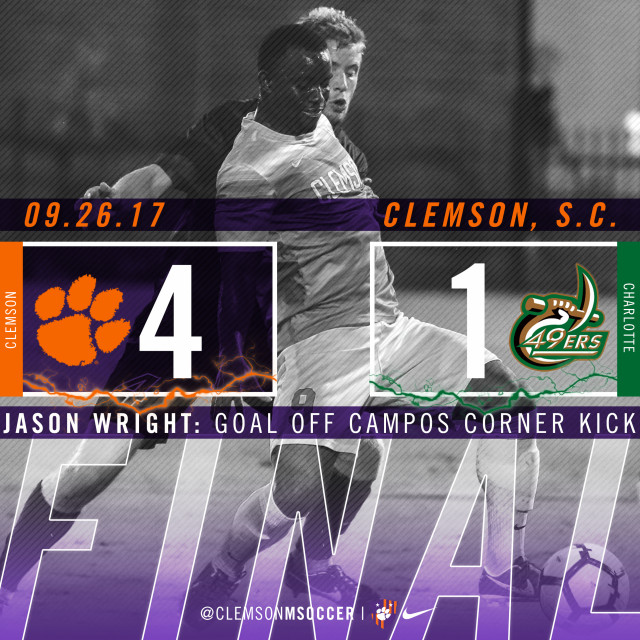 CLEMSON, S.C. – Seniors Jason Wright and Oliver Shannon scored off assists from fellow seniors Diego Campos and Michael Melvin to propel the No. 6 Clemson Tigers past the Charlotte 49ers 4-1 on Tuesday night at Historic Riggs Field. With the win, Clemson improved to 8-1-0 overall, while Charlotte fell to 3-2-2 on the year.

The Tigers took a quick lead when Wright netted a pass from Cale Thorne in the second minute. 49er Tommy Madden then tied it up in the 22nd minute with his second goal of the year, a through ball down the middle that he laced in from 15 yards out. The two teams went into halftime even at 1-1.

Wright scored his second goal of the night and gave Clemson a 2-1 lead in the 57th minute, playing a Campos corner kick and netting a shot from 10 yards out. Shannon then upped the Tigers’ lead to two goals in the 66th minute when he found the back of the net on a laser shot from 24 yards out off a pass from Melvin, who had powered past a Charlotte defender to find open field before connecting with Shannon. Robbie Robinson netted Clemson’s final goal of the night in the 84th minute after Harrison Kurtz found Robby Jacobs on the left side, and Jacobs crossed it inside to Robinson, who scored from eight yards out.

“Any great team is going to have great leadership,” said head coach Mike Noonan. “It doesn’t necessarily have to come from seniors, but our seniors are stepping up right now. Tanner [Dieterich] is stepping up, Patrick [Bunk-Andersen] is stepping up, Ximo [Miralles] is stepping up, so we are getting it from a lot of different places, but it’s a little something extra when your seniors do it, and it was nice to see again tonight.”

Clemson goes on the road to face No. 2 Wake Forest in a top-10 matchup on Friday at 7 p.m. The match will be televised on ESPNU.