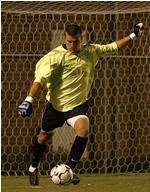 North Carolina scored first at the 61:54 mark. Campbell collected a rebound off the post and sent a shot into the net for his third goal of the season. The first shot was taken by Dax McCarty who was credited with the assist.

Clemson had a chance at a tying goal with 5:44 left to go in the game as a shot by Bryson Moore hit the post and a follow-up shot by the Tigers went wide of the goal.

Clemson’s Justin Moore took a shot with nine seconds remaining but the shot was saved by the Tar Heels’ goalkeeper Ford Williams.

Clemson and North Carolina both took 13 shots each for the match.

The Tigers will play host to N.C. State next Friday, September 30, at 7:00 p.m. at Historic Riggs Field.