CLEMSON, S.C. — The Clemson Tigers (1-0) won their opening match of the 2021 season in thrilling fashion, overcoming an early deficit to defeat the St. John’s Red Storm, 2-1, on Thursday night at Historic Riggs Field. Isaiah Reid’s 66th minute equalizer and Hamady Diop’s free kick beauty proved to be enough for the Tigers to extend their home unbeaten streak to 26 games.

Clemson fell behind early when a St. John’s (0-1) header off a corner kick found the back of the net in the 9th minute of the match. The Tigers battled for the remainder of the half but a stout and lengthy St. John’s defense kept the Clemson attack from creating a threatening chance.

The Tigers came out of the halftime locker room much more cohesive on the offensive end. A James Brighton header off a cross from Reid barely missed the right side of the net just minutes before a Luis Felipe Fernandez-Salvador volley eclipsed the crossbar, resulting harmlessly in a St. John’s goal kick.

It wasn’t until the 66th minute when a beautiful give-and-go from Reid to Brighton and then through a defender’s legs back to Reid resulted in a clinical one touch finish that evened the score at one apiece.

ISAIAH REID WITH THE EQUALIZER ON A 𝐁𝐄𝐀𝐔𝐓𝐈𝐅𝐔𝐋 GIVE-AND-GO WITH JAMES BRIGHTON!!! WE'RE TIED AT 1 APIECE WITH 20 TO PLAY!#ClemsonUnited🧡💜https://t.co/vUiwL4nDf6 pic.twitter.com/gGRpxJmYPk

Now clearly on the front foot, midfielder Ousmane Sylla drew a free kick from just outside the penalty box. Diop then found a hole in the wall to slot the game-winning-goal just to the left of the Red Storm’s keeper.

HAMADY DIOP GOES 𝐓𝐇𝐑𝐎𝐔𝐆𝐇 THE WALL TO GIVE THE TIGERS THE LEAD!!!!! 2-1 CLEMSON WITH 14 TO PLAY. #ClemsonUnited🧡💜https://t.co/vUiwL4nDf6 pic.twitter.com/RQIplhmDOp

St. John’s would threaten to even the score with five minutes left, drawing a red card-foul on Clemson’s Justin Malou and earning a free kick in a dangerous position. The free kick was headed for the back of the net when a leaping George Marks got his right hand to the ball to push it over the frame and make a game-saving stop.

He keeps us ahead 2-1 with just five to go.#ClemsonUnited🧡💜 pic.twitter.com/D4oqPbUcyx

Mike Noonan’s Tigers, down a man, held on for the final minutes of the game and improved to 1-0 on the new season.

Up Next, the Tigers will close out the first week of their season on Sunday night when they take on USC Upstate at Historic Riggs Field. Kickoff is set for 7 p.m. and the game will be broadcast on ACCNX. 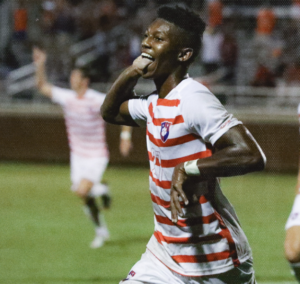