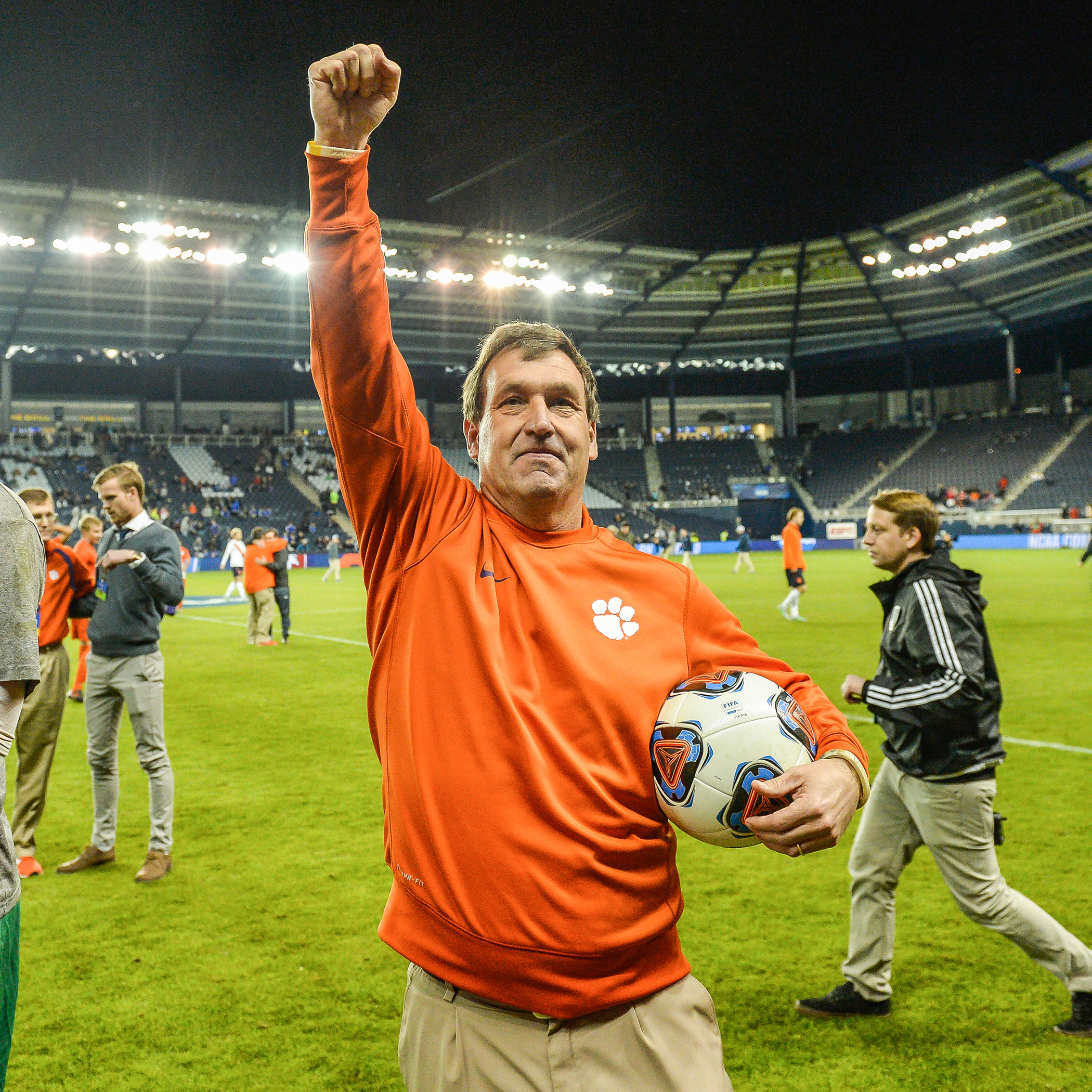 While the three-letter word is the ultimate impetus for why any athletics coach does what he or she does, head coach Mike Noonan has added an interesting connotation to the word that is perfectly indicative of what has made him so successful since taking the reins of the Clemson men’s soccer program.

“That’s the way that we address things,” Noonan said of his mantra. “We try to stay in the present and talk about what this team can accomplish and what types of goals and dreams we have for this team.”

Taking over a program in 2010 that had finished 6-12-1 the previous season, Noonan has since led the men’s soccer team back to the pinnacle of the college soccer landscape. With an ACC championship in 2014 and a national championship game appearance a year later, 2016 has brought with it conspicuously lofty expectations for the Tigers.

But true to Noonan’s coaching modus operandi, national championship aspirations are all but mere visions surreptitiously dancing in the heads of the men’s soccer players. Winning the national championship is obviously the ultimate goal, but Noonan has instilled in his players that the ebb and flow of the college soccer season is nebulous in nature and must be embraced in the here and now.

“I think it’s more business as usual,” Noonan stated when asked whether or not this season brought with it any added pressure. “We understand that it’s every team in the country’s dream to be where we were last year, playing in the final game of the season. And that’s why we do what we do, and I think our team is motivated to get there again.”

Falling to Stanford in last season’s national title match, the Tigers assuredly have extra motivation to reach the apex of the NCAA soccer mountain by claiming a national championship this season, but true to form with a Noonan coached team, there is no added pressure to do so. It’s business as usual.

Noonan is a player’s coach, first and foremost. Beaming with pride when talking about the five players from last year’s team who have since taken their talents to the professional level, it is obvious that he is proud of what he has built since taking the helm in 2010.

In a short time under his watch, the men’s soccer team at Clemson has become a crown jewel of the university. Perennially one of the country’s elite programs, the Tigers fell victim to inconsistency prior to Noonan’s appointment as head coach. Taking over as the foreman of a rebuilding project, so to speak, Noonan has made quick work in returning the program to a premier level that it arguably had not seen since the 1980s.

Despite losing impeccable talent to the professional ranks on a regular basis the last few years, the Tigers have always seemed to trudge on, virtually unfazed.

“Instead of building one team, we have attempted to rebuild a program, and a program that has success year after year,” said Noonan. “You are always going to cycle in and cycle out players. Hopefully, we’ve gotten the foundation now where when we do lose some talent we have players who are either in our program or entering our program who can fill the void.”

With a roster composed of the perfect mixture of veterans and burgeoning young talent, this year’s team is primed to repeat the outstanding success of its recent predecessors. Led by star upperclassmen Diego Campos and Iman Mafi, the 2016 team is rife with talent, and, despite losing standout goalkeeper Andrew Tarbell to the MLS in January, Clemson has what it takes to compete for a berth in the College Cup once again.

Despite the fact that making that return is an underlying motivation for the Tigers this year, according to Noonan, it is not pressing on the players’ minds.

“They’re motivated to right a wrong, in terms of the loss that we had, but I think they won’t deal with that until the fact comes that we can actually play in that game again, whether that’s this year’s team or a future team.”

With Noonan, the present is the ultimate priority, and patience is key. Noonan understands the inner mechanics of a championship-caliber team.

Although it may seem cliché, team chemistry is a major reason why Clemson has regained its elite form in recent years, as the close-knit teams have excelled on all fronts.

Recently winning the prestigious Clemson University President’s Pride Cup, the men’s soccer team earned the distinguished honor due to its excellence on the field, in the classroom and in the community, a fitting embodiment of Noonan’s W-I-N philosophy.

True to his coaching roots, Noonan likes to challenge his players. Taking an offseason trip to Argentina, the squad played against some of the best talent that South American football has to offer, and it came away a better team because of it.

For Noonan, his team is not just a well-oiled machine meant to dominate on the pitch and nothing more. The program is a reflection of himself, his coaching staff, Clemson University and, of course, the players themselves. While winning games is the obvious goal, what it takes to win games is what concerns Noonan the most.

While W-I-N is a clever acronym, it is also an all-too-perfect emblem of what Clemson soccer is all about. Winning is the surface level manifestation of success, but “what’s important now” is the foundation upon which winning is built.

Noonan has manufactured more than just a mindset focused upon winning. Rather, it is a mindset built for winning, and it has proliferated throughout the team over the course of his six seasons as head coach.

Although the season is long, Noonan is already impressed with what his team has showcased thus far.

Rest assured, the qualities and the intangible pieces that Noonan referred to are apparent within his team, but the winning attitude that the wise coach has helped generate is the crux of it all.

Winning is infectious, and a winning attitude is pervasive. The Tigers have benefited from those teachings, due in no small part to Noonan. But you would never know it by hearing him humbly discuss the winning nature that has become synonymous with his team.

The winning attitude starts within, and it translates into on-field success. Just as much a life coach as he is a soccer coach, Noonan has shed new light upon what exactly winning entails. Most importantly, it entails what is important now. And, as evidenced by the Clemson men’s soccer team in recent years, if what is important now is given top priority, everything else will fall into place.

Sure, national championship aspirations are high surrounding this year’s team, but do not tell Noonan that. What is important now is his lone concern, because becoming a winner is not just a process, it is a lifestyle.