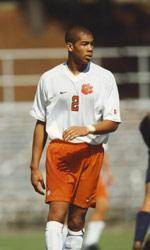 Despite being a defender for much of year, Onyewu finished the season with seven goals and five assists for 19 points. After scoring the game-tying and game-winning goals against Alabama-Birmingham in the NCAA Tournament Round of 16, he was chosen as the National Player of the Week by College Soccer News. Earlier in the season he was named First-Team All-ACC for the second consecutive year. He was also selected as the Defensive MVP of the Clemson Nike Invitational (Sept. 28-30). A finalist for this year’s Missouri Athletic Club National Player of the Year award, Onyewu was a key reason why Clemson posted 10 shutouts victories this past season.

Fuller, a native of Portland, OR, was a senior for the Tigers in the 2001 season. He led Clemson with 11 goals and eight assists for 30 points. He was named NSCAA All-South, and was named the ACC Tournament’s MVP as Clemson won the ACC Tournament last season. Earlier this month he was selected by the New England Revolution as the 21st pick overall in the MLS draft.