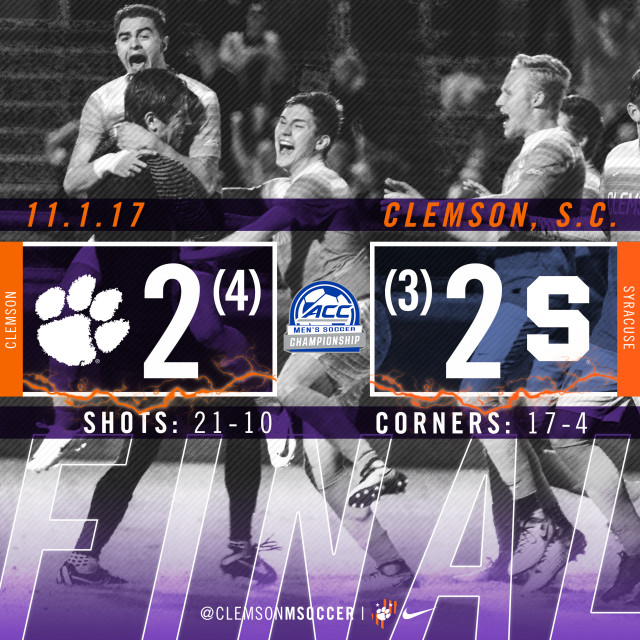 No. 9 Clemson Edges Syracuse in PKs in ACC Tournament Opener

CLEMSON, S.C. – The No. 9 and No. 5-seeded Clemson Tigers advanced to the quarterfinals of the ACC Tournament after defeating the No. 12-seeded Syracuse Orange in penalty kicks on Wednesday night at Historic Riggs Field. Clemson moved to 11-4-1 overall while Syracuse moved to 6-8-4.

In the first half, Clemson outshot Syracuse 4-1, with a 3-1 advantage in shots on goal, but the two teams went into halftime scoreless. Tajon Buchanan started the scoring in the 60th minute, netting a shot from 10 yards out to put the Orange up 1-0.

Saul Chinchilla evened the score 10 minutes later, sending a pass into the middle from Oliver Shannon into the back of the net from three yards out. Patrick Bunk-Andersen gave the Tigers their first lead in the 86th minute after a shot by Shannon was saved, and Bunk-Andersen capitalized on the deflection.

Syracuse netted the equalizer in the 89th minute, forcing the two teams into overtime, which saw no goals scored in either 10-minute period.

In the penalty shootout, both sides missed their opening kicks before Chris Heijjer slotted home his chance to give the Tigers a 1-0 lead. Syracuse netted their second kick to level the score. Then, Michael Zierhoffer made a save followed by a save from Hendrick Hilpert to keep the score knotted at one. The next two players from each side buried their chances, evening the score at three. The Tigers then advanced in the penalty shootout after sophomore Harrison Kurtz scored the game-winning goal, and the Orange missed their final opportunity.

“We had a lot of really good chances again, like we did against Louisville and in most of our games,” head coach Mike Noonan said. “But the final pass, the final shot has got to be more clinical. I said that after last game, and I’ll say that we were better tonight, but we weren’t quite where we need to be. We’re expecting a tough game against Duke. Duke is a very good defensive team with a good defensive goalkeeper. They’ve got guys up front who are dangerous and can hit you on the break and score. We’ve got our hands full on Sunday, just like against Syracuse. It’s really hard, in the ACC, to beat good teams twice, and we’re going to have to go up to Duke and do it at Duke twice. It’s a big ask, but I think we’re up to it.”