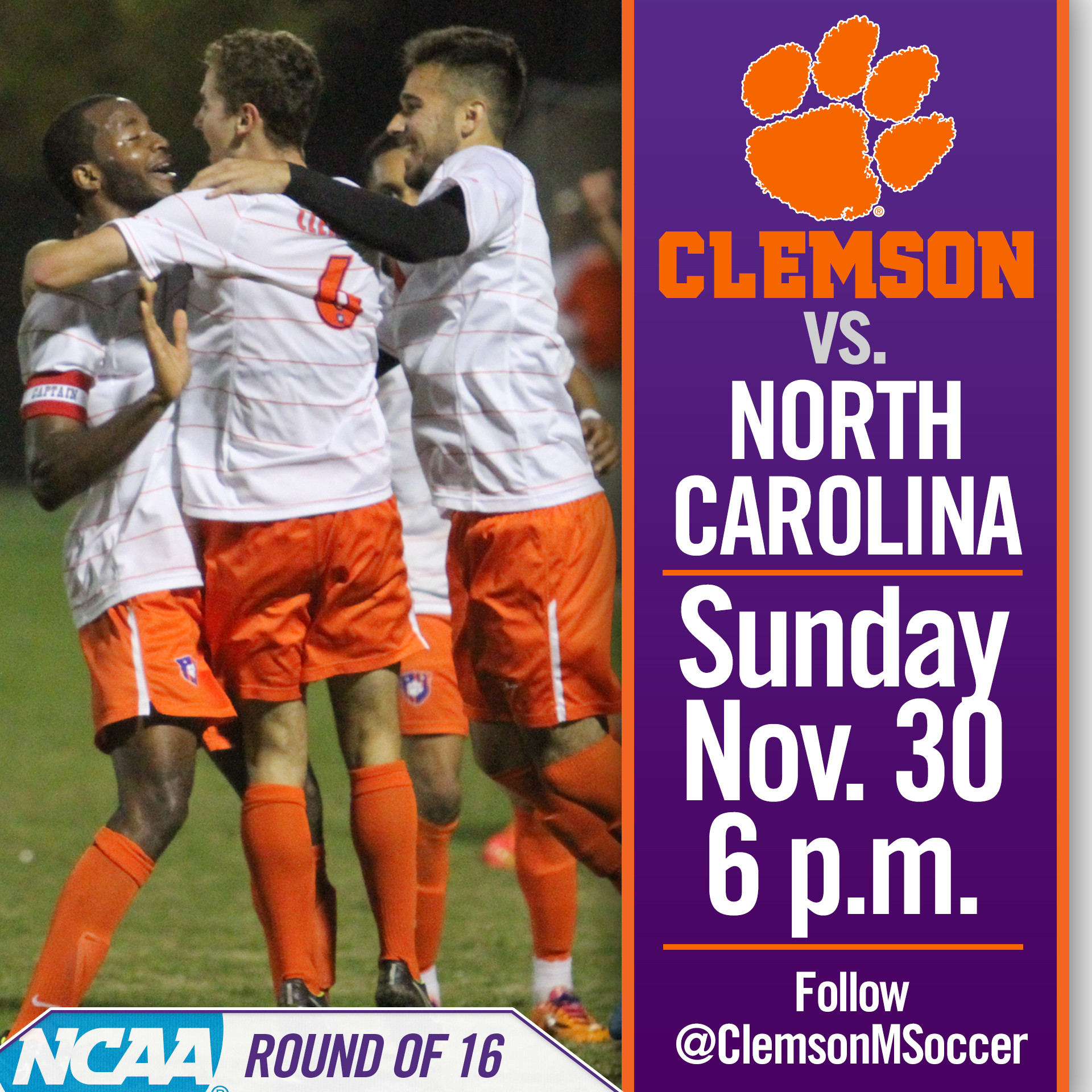 No. 7 Clemson Hosts No. 4 North Carolina in NCAA Tournament Round of 16 Sunday

CLEMSON, S.C. – Fresh off a 2-1 win over No. 25 Coastal Carolina in the second round of the NCAA Tournament, the seventh ranked and seventh-seeded Clemson men’s soccer team hosts No. 4 North Carolina Sunday, Nov. 30 at 6 p.m. at Historic Riggs Field in the Round of 16 of the NCAA Tournament. The match will be broadcast live on ESPN3. Tickets are available on ClemsonTigers.com via the link above or at the gate prior to kickoff.

Clemson improved to 12-6-3 this season with Monday night’s win over Coastal Carolina. Junior Paul Clowes and freshman Diego Campos both scored in the Tiger victory. Sophomore Andrew Tarbell started in goal and saved six shots, four in the second half. Monday night’s win was Clemson’s first NCAA Tournament win since 2006. Clemson will play in its 23rd Sweet 16 in program history and first since 2006 on Sunday.

The Tigers are tied for fifth nationally with 44 total assists this season. Senior Manolo Sanchez and junior T.J. Casner are tied for the team lead in total points, each has 12 on the season. The two are also tied for the team lead in assists with six. Tarbell has started 16 matches in goal this season and has saved 41 shots en route to nine wins and five shutouts. To date, 15 different players have scored for Clemson this season. Sophomore Austen Burnikel leads the team with five goals.

Clemson and North Carolina met on Oct. 3 this season, a 3-2 Tar Heel victory in double overtime in Chapel Hill. North Carolina junior Raby George took a penalty kick in the 102nd minute that secured the win for the Tar Heels. The kick was prompted by a Clemson defender taking down a Tar Heel player in the box. Burnikel and Campos both scored in the match, and Tarbell set a new career high with eight saves that night. Despite that result, Clemson leads the all-time series between the two programs 29-24-6.