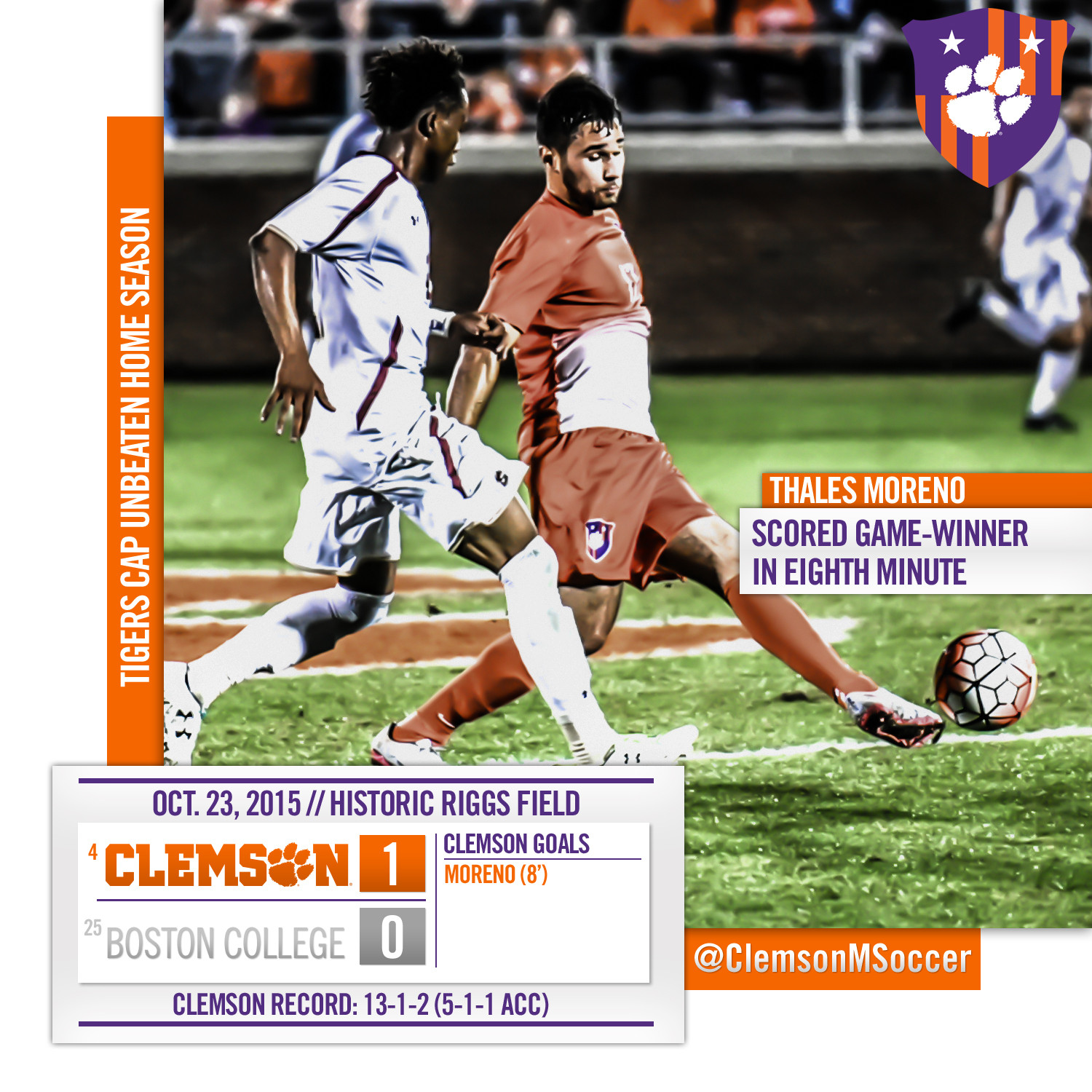 CLEMSON, S.C. – Thales Moreno’s goal in the eighth minute was enough to give fourth-ranked Clemson a 1-0 victory over No. 25 Boston College on Friday night at Historic Riggs Field. With the win, the Tigers completed their slate of regular season home games undefeated, with a 9-0-1 record. Overall, the team improved to 13-1-2 (5-1-1 ACC), while the Eagles fell to 8-5-1 (3-4 ACC).

“I thought we opened the game very well, and were excellent in the first 25 minutes,” said Head Coach Mike Noonan. “Then we slowed down a bit. I think we got tired as the game went on and our finishing was just not clinical. But, the effort and attitude were 100% better than earlier in the week and I was pleased with that. To finish the regular season undefeated at home is an accomplishment that our seniors and our entire team can hang their hat on. I’d like to thank the fans for playing a big role in that success.”

The Tigers took control of the game quickly, as Moreno scored his third goal of the season just seven minutes in to the game. Paul Clowes, one of five seniors honored during a pregame ceremony, picked up an assist on the play, sending a pass up the middle to Moreno, who launched a shot from 16 yards into the top left corner of the net.

Clemson outshot the Eagles 7-5 in the first half, including one by junior Iman Mafi that hit the crossbar, and 13-9 for the game, but held on to the 1-0 lead for the remainder of the game. Redshirt junior keeper Andrew Tarbell recorded another clean sheet, his seventh of the season, and fifth in the last seven games, and added two saves in the contest. Tarbell has allowed just 10 goals through the first 15 games of the regular season.

“There are two words that best describe this group of seniors – ‘first class,’ ” said Noonan. “They have had a first-class approach in everything they have done from the time they arrived on campus, in the way they approached their academics as well as soccer, in the way they incorporated their younger teammates into the program, and in the way they embraced tradition and pursued excellence. It goes without saying I am extremely proud of them.”

Clemson’s final regular season game is set for next Friday, Oct. 30 against NC State in Raleigh, N.C. The game between the Tigers and Wolfpack kicks off at 7 p.m. at Dail Soccer Stadium.