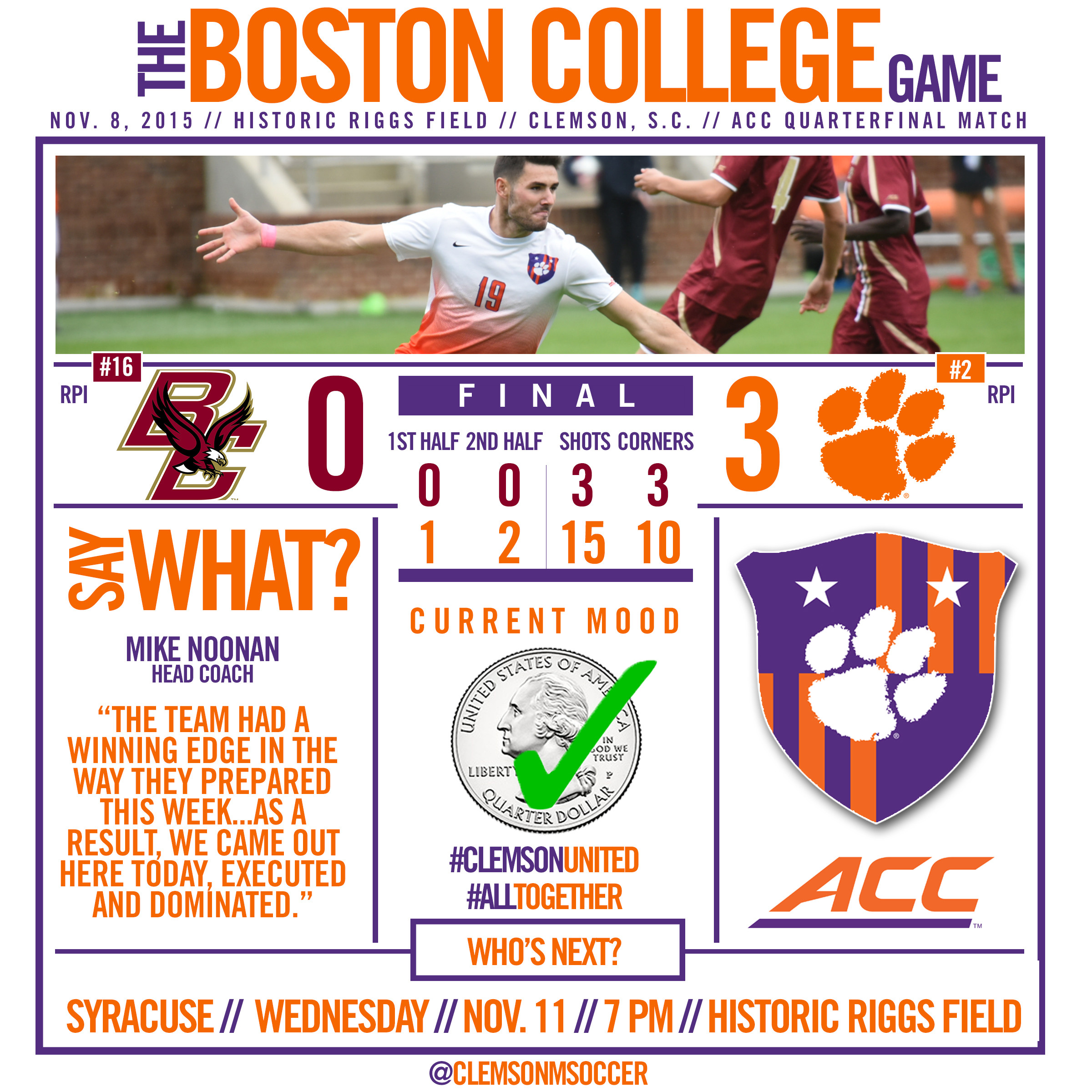 No. 2 Tigers Advance to ACC Semifinals with 3-0 Win Over BC Sunday

CLEMSON, S.C. – The second-ranked Clemson men’s soccer team defeated Boston College (9-7-1) by a score of 3-0 on Sunday afternoon in an ACC Quarterfinal matchup at Historic Riggs Field. With the win, the Tigers improve to 15-1-2 on the season, and advance to the ACC Semifinals on Wednesday, Nov. 11. It is the fourth year in a row that Clemson has reached at least the semifinals of the conference tournament.

“We had a great week of preparation leading up to today’s game,” noted Head Coach Mike Noonan. “The team seemed to have a winning edge in the way they prepared over the last eight days. As a result of that, we came out here today and executed and were dominant in the game, and I was pleased to see that.

“This senior class has been in at least the semifinals of the ACC Tournament four years in a row. That’s extremely impressive, especially in this league. Hats off to them.”

Junior forward Austen Burnikel gave the Tigers a 1-0 lead in the 38th minute. Junior defender Iman Mafi sent in a cross from the left side, which Burnikel headed in to the lower left corner of the net from inside the box for his seventh goal of the season. Mafi now has a team-best five assists on the season. The Tigers’ second goal of the day came on an own goal by Boston College in the 57th minute.

Redshirt senior Kyle Murphy netted his seventh goal of the season in the 68th minute of play to provide the final margin of 3-0. Redshirt junior midfielder John Cajka passed the ball ahead to Murphy, who shot and scored from 12 yards out.

For the game, the Tigers outshot the Eagles 15-3, and had a 10-3 advantage in corner kicks. Redshirt junior keeper Andrew Tarbell posted two saves in the contest, and recorded his eighth solo shutout of the year.

Clemson hosts Syracuse in the ACC Semifinals on Wednesday, Nov. 11 at 7 p.m. at Historic Riggs Field. The Orange, the No. 7 seed in the tournament, advanced to the semifinals after tying No. 2-seed North Carolina 1-1 and advancing 4-3 in penalty kicks over the Tar Heels on Sunday afternoon in Chapel Hill.