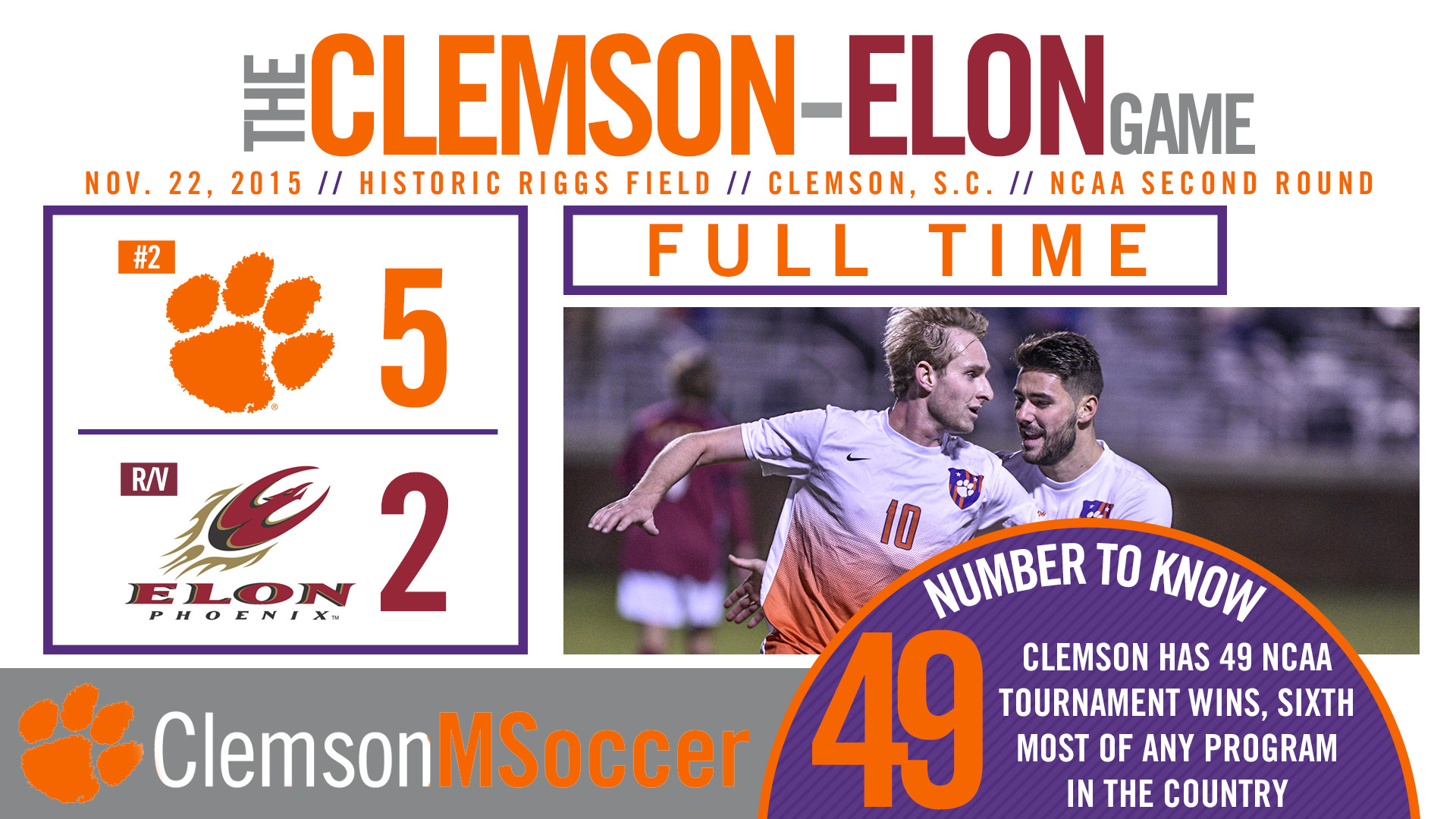 No. 2 Clemson?s Offense Too Much for Elon in NCAA Second Round Victory

CLEMSON, S.C. – Four different players scored five goals to help the No. 2 National Seed Tigers to a 5-2 victory over Elon in the NCAA Second Round on Sunday night at Historic Riggs Field. The five goals were the most scored by Clemson in an NCAA tournament contest in exactly 17 years, when the Tigers defeated Lafayette 5-0 on Nov. 22, 1998. With Sunday win, Clemson improved to 16-2-2 overall and secured a spot in the NCAA Sweet 16. Elon concluded its season at 14-6-1 with the loss.

“We hadn’t played in awhile, but I was pleased to see that the guys put to use the lessons they learned from our last game,” said Head Coach Mike Noonan. “We played with good energy and focus, and we moved the ball exceptionally well, especially in the first half. It was a good night and a good start for us in the tournament.”

Senior forward T.J. Casner scored two of the Tigers’ five goals, his ninth and 10th of the season, and also tallied an assist in the match. His first goal gave Clemson a 1-0 lead in the 27th minute, and was assisted by junior defender Iman Mafi and sophomore midfielder Michael Melvin. Casner’s second goal came just over two minutes into the second half, at the 47:17 mark, and was again assisted by Mafi.

Mafi concluded the game with one goal, scored on a penalty kick in the 81st minute after sophomore midfielder Oliver Shannon was taken down in the box, and an impressive three assists. The three assists in a single game put him in a tie for sixth in Clemson history in that category. Mafi now has a team-best eight assists on the season.

Junior forward Thales Moreno and sophomore midfielder Saul Chinchilla also scored for the Tigers against the Phoenix. Moreno’s goal came in the 39th minute, and was his fourth of the year, while Chinchilla netted his second goal of the season in the 73rd minute. Melvin recorded his second assist of the night on Chinchilla’s goal.

“The crowd was great again today,” noted Casner after the match. “It really gives the team a boost to know that there are so many people that want to come out, even on a cold night, and support and cheer for us. The energy and environment they create is really what the Clemson Family is all about.”