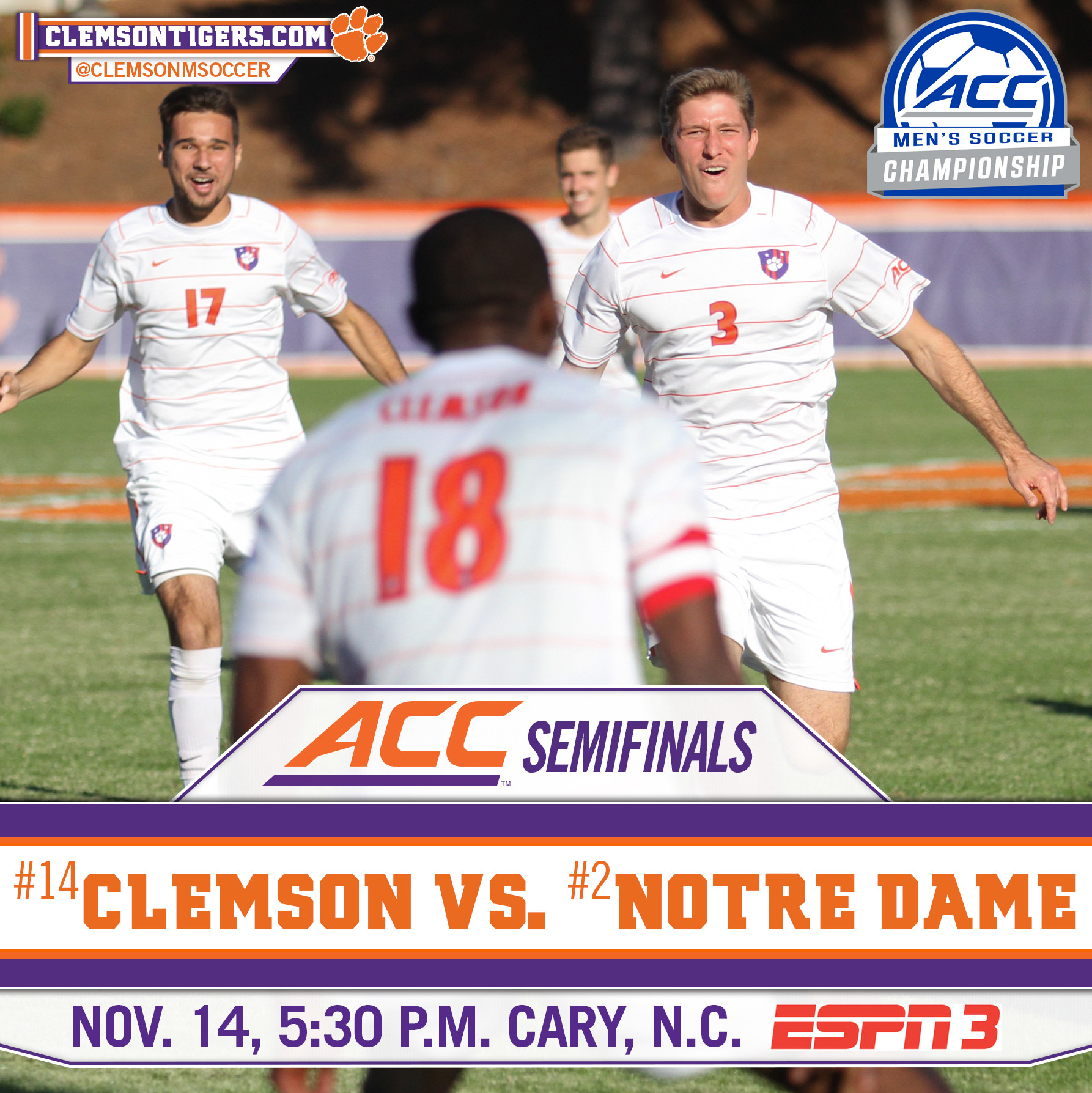 No. 14 Clemson Meets No. 2 Notre Dame in ACC Semifinal Match on Friday

CLEMSON, S.C. – The Clemson men’s soccer team travels to Cary, N.C. on Friday, Nov. 14 to meet top-seeded and No. 2 Notre Dame in the ACC Semifinals. The match kicks off at 5:30 p.m. from WakeMed Soccer Park and will be broadcast live on ESPN3. Tickets are available online through the ACC or at the gate prior to the match.

Clemson stands at 10-6-2 on the season after advancing to the semifinals by a 3-2 score in penalty kicks over Wake Forest on Sunday at Historic Riggs Field. Senior captain Phanuel Kavita scored the winning goal in the shoot-out. Clemson is ranked 15th in the latest RPI poll, released by the NCAA on Monday. The Tigers are also ranked in all three major national polls this week. The National Soccer Coaches Association of America (NSCAA) and TopDrawerSoccer.com tab Clemson 14th nationally, while Soccer America ranks Clemson 19th.

Clemson is 4-6-2 all time in the semifinal round of the ACC Tournament. Most recently, Clemson was defeated 1-0 by Maryland in overtime in last season’s semifinal.

Clemson is tied for seventh in the nation with 36 total assists this season. Junior T.J. Casner leads the team in that category with six assists, while senior Manolo Sanchez has five on the season. Sophomore Austen Burnikel leads the team in goals with five this season, four other Tigers have scored three goals. In total, 14 different players have scored for Clemson this season. Sophomore Andrew Tarbell has started 13 matches in goal for the Tigers, saving 32 shots en route to seven wins. Redshirt junior Chris Glodack has seen action in seven games, including the penalty kick shoot-out against Wake Forest, in which he saved three shots.

Notre Dame is coming off a 3-0 win over No. 17 Virginia in the ACC Quarterfinals on Sunday. The Irish are the tournament’s No. 1 seed and finished the regular season with a 10-4-3 overall record and a 6-1-1 record in the ACC. Junior Patrick Hodan leads Notre Dame in the field, he has scored nine goals and has 21 total points this season. Graduate student Patrick Wall has started all 18 matches in goal for the Irish this season, saving 57 shots en route to 11 wins.

Clemson and Notre Dame have met four times in the history of the two programs, with each team winning two matches. Most recently, Notre Dame defeated the Tigers 2-1 on Oct. 5, 2013 at Historic Riggs Field. Clemson has never traveled to Notre Dame, with all meetings coming either at Clemson or at a neutral site. The Tigers and Irish have never met in the ACC Tournament.