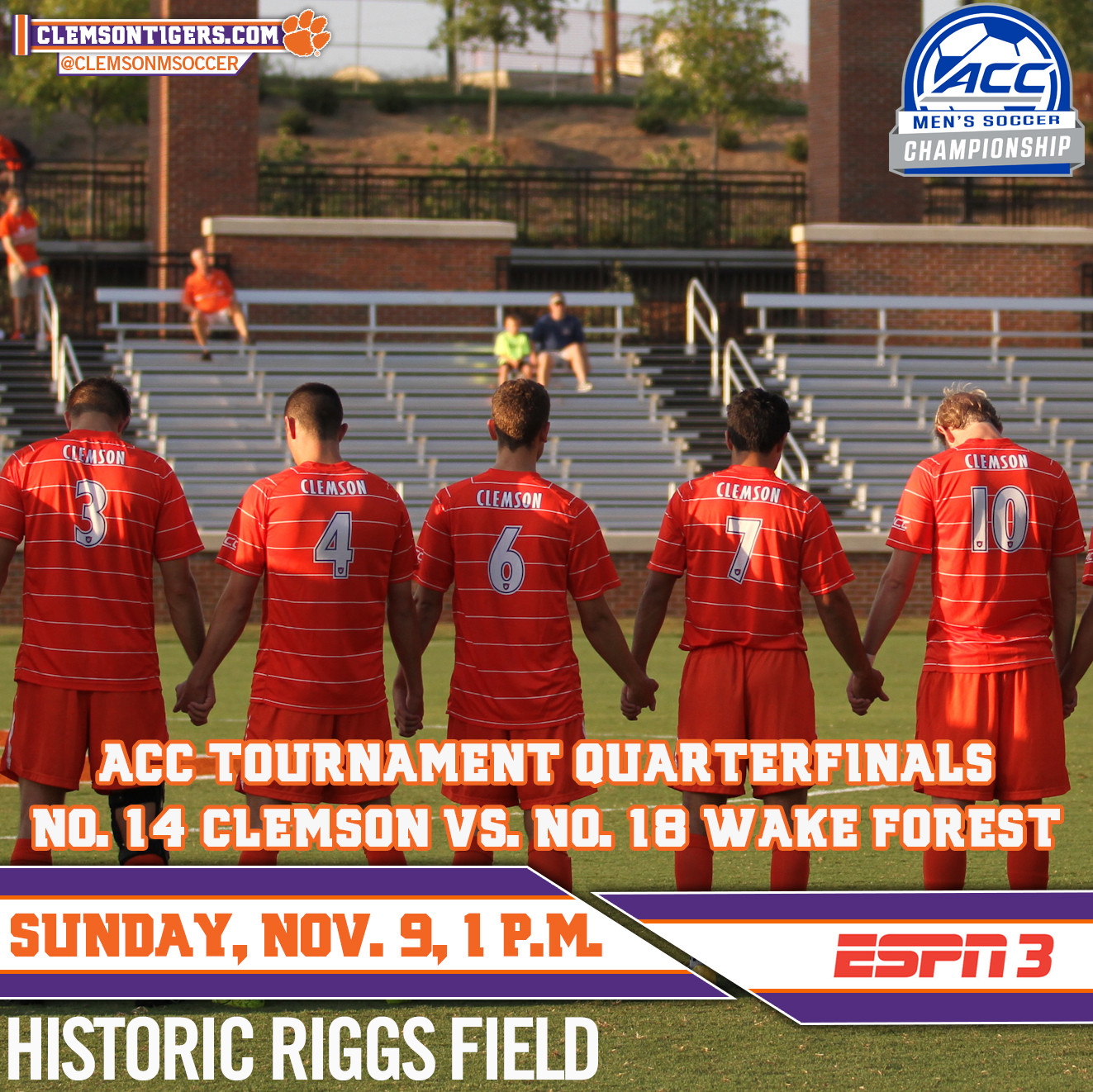 No. 14 Clemson Hosts No. 18 Wake Forest in ACC Tournament Quarterfinals

CLEMSON, S.C. – The 14th-ranked Clemson men’s soccer team hosts No. 18 Wake Forest Sunday afternoon at Historic Riggs Field. The match kicks off at 1 p.m. on ESPN3. Tickets can be purchased online through the Clemson Athletic Ticket Office or at the gate prior to the game.

Clemson finished the 2014 regular season with a 10-6-1 overall record and a 5-2-1 record in the ACC. The Tigers won a share of the ACC’s Atlantic Division and are the No. 4 seed in the ACC Tournament. A 2-0 win over visiting NC State last Friday night, Oct. 31, capped off a successful regular season. Clemson is ranked in all three major national polls this week and moved up to 12th nationally in the most recent RPI poll. Clemson finished the regular season on a six match unbeaten streak.

Senior Manolo Sanchez and junior T.J. Casner lead the Tigers in total scoring this season, each has 11 total points. They both are tied for the team lead in assists with five apiece. Sophomore Austen Burnikel leads the team in total goals with five this season, including two against NC State last week. To date, 14 different players have scored a goal for Clemson this season. Sophomore Andrew Tarbell has started 12 matches in goal, seeing over one thousand minutes of action in the regular season. He has 30 total saves and a 7-4-1 overall record.

Wake Forest finished the regular season with a 10-7-0 overall record and a 5-3-0 record in the ACC. The Demon Deacons knocked off Louisville 1-0 to cap off the regular season. Junior Michael Gamble leads Wake Forest in assists (10) and points (22) and is tied for the team lead in goals (6). Redshirt sophomore goalkeeper Alec Ferrell has started every match in goal for Wake Forest, saving 61 shots.

Clemson and Wake Forest met earlier this season on Sept. 26, a 3-1 Clemson win. Casner, junior Kyle Fisher and sophomore Thales Moreno all scored in the match for Clemson. Tarbell went the distance in goal and picked up his fourth win of the season.