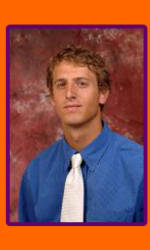 Miech will be responsible for the Tiger goalkeepers. He comes to Clemson from Missouri State University where he was a men’s assistant coach and was an assistant director of camps.

Miech played collegiately at Creighton before graduating from NAIA Morningside College in Sioux City, Iowa. At Creighton, he played for former Clemson standout Jaro Zawislan. At Morningside, Miech earned NAIA All-America honors as a senior and set school records for saves, save percentage, shutouts, and wins.

Previous coaching experience for Miech includes assistant women’s coach at the University of Wisconsin at Stevens Point in 2006, girls’ junior varsity coach at Stevens Point Area Senior High in the spring of 2006, women’s goalkeeper coach at Morningside College from 2003-2005. Miech has also worked camps for Tony DiCicco’s SoccerPlus, the University of Wisconsin at Stevens Point, Creighton, and with the Sioux Falls SpitFire of the Premier Development League. Miech earned a bachelor’s degree in graphic design with a joint major in philosophical and religious studies from Morningside College in 2005. He completed his master’s degree in administrative studies at Missouri State in 2007.

“We are glad to have Jesse on board as an assistant coach,” said Adair. “Jesse has lots of experience in training goalkeepers. He will bring a wealth of experience to the position and will be a great addition to our staff.”