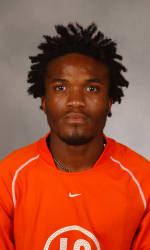 The following interview was conducted with former Clemson men’s soccer player Dane Richards. Richards is currently playing with the New York Red Bulls of the MLS. Richards played at Clemson in 2005 and 2006 and was an All-American in 2006.

How are you enjoying playing in New York? I am very happy in New York. The city, the team and the coaching staff are all very nice. Hopefully the run that I have had with the team will continue.

What is the biggest difference between college and professional soccer? The speed of play is quicker than when I played in college. Every player understands the game and they are all technical. The Major League Soccer teams are of a very similar level and it just depends on the day as to who will win.

What do you miss most about Clemson? I miss my teammates and coaches and I miss the town. The people in Clemson were very nice to me. The camaraderie is special in college and it passes very quickly. I also miss pre-season (as he laughs!!!)

How did Clemson’s soccer program help you to be a professional? The program helped me a lot. I became much stronger during my two seasons at Clemson. The coaching staff was able to work on my weaknesses. They stressed to me that I would be a right midfielder at the professional level and this prepared me to defend more than I was used to.

You recently had the opportunity to play against David Beckham, how was that experience? It was one of the top three games that I have ever been involved in. There were over 66,000 people at the game and we won 5-4. There was a section of the crowd that was constantly cheering my name during the game, which is something that I will never forget. Beckham is a fantastic player and you don’t quite realize until you get so close up.

What do you feel that you need to improve to help your game? I think that I need to sharpen up my first touch so that I can take more advantage of my speed. Also, I need to be more aware tactically of where to be. My weaker foot could also use some help, but it is improving.

What are your short and long term goals with New York and Jamaica? My short-term goals are to make the playoffs, stay in the starting line up and possibly win the MLS cup this year. With Jamaica, I would like to be a big part of the team for the qualification to the 2010 World Cup that will be held in South Africa.

Who are the best players that you have played against in Major League Soccer? The two players that stand out from other teams are Jaime Moreno from DC United and David Beckham. Both players make the game seem very simple. On New York, I think Juan Pablo Angel is our best player. He has great experience from playing in South America and in the English Premiership.

Who are your friends on the team? The team gets along together very well. That is a big part of why I have enjoyed this year so much. I hang out a lot with Jose Altidore and Sinisa Ubiparipovic. Clint Mathis is always fun to hang with. He knows everyone and always knows what is going on in New York.

What was your most memorable game at Clemson? There were many great battles in the ACC. It is such a competitive conference. The run to the Final Four was a lot of fun; not many college players get the opportunity to experience a Final Four. However, I think the game when we defeated Maryland at home in front of 6800 people was the game that I remember most. They were ranked #1 and were the defending National Champions. We got a red card during the game and played down a man. I assisted on the winning goal.