From Aspiring Tiger to Inspirational Talent

Hailing from Roswell, Georgia, Charlie Asensio has been a staple of Clemson’s back line throughout his four years in Tigertown. Clemson fans have gotten accustomed to his familiar smiling face commanding the left side of the field, both defensively and in the counterattack.

For Charlie, playing at Clemson was an experience that was a long time in the making. Since he was little, he would make the two-hour trip to watch Head Coach Mike Noonan coach athletes who were twice his age. Charlie even has a photo with the Tigers’ manager from well before he even began high school. 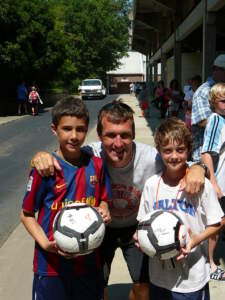 “I actually went to a good bit of games with my buddies from club soccer when I was 10 or 11,” said Clemson’s steady left back. “10 years ago, I was a little kid that was coming here wanting autographs.”

Now, as one of the key members of Clemson United, he gets the chance to pay that experience forward. Following Clemson’s 2-0 loss to Notre Dame, Charlie met a young soccer player by the name of Mack Thomas, who also happens to be from Roswell. 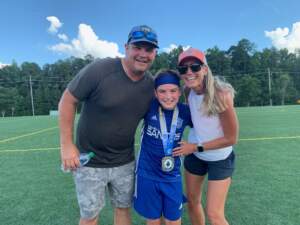 After the difficult defeat, he walked over to the stands to greet some waiting fans, but 10-year-old Mack and his father Chad were there specifically to get a word in with their fellow Roswellian. Charlie takes some time after every home game to speak with and thank the Clemson faithful at Historic Riggs Field, but it’s not every match that he gets to meet people from his hometown.

When checking out Clemson’s roster a couple of years ago, Chad had noticed that Charlie was from Roswell. He eventually found out that Charlie was coached growing up by one of his good friends, Todd Gispert, who said of Charlie that he is, “probably one of the best I’ve ever coached.” So, when Mack was waiting with a ball in hand ripe to be signed, they were waiting specifically to speak with Charlie.

Mack is a defender himself, so when he does make the trip to watch the Tigers play, he pays extra attention to the back line. He respects Charlie’s poise, stating, “He’s really dominant, but he’s always calm on the ball, and I feel like that’s really important.”

Charlie spoke modestly of his game and what he hopes people take from it. “I feel like my game isn’t super flashy… I kind of take pride in being consistent and working really hard in every single thing that I do,” he said. “I think that’s something that if every kid sets their mind on doing and they make sure they do the little things right… they can play DI or professional soccer, and that’s what I want to get across to little kids.”

For Mack, the post-game conversation which lasted over twenty minutes was about way more than just soccer. At just 10 years old, the young Clemson fan got a glimpse of what it means to be a Clemson Tiger and truly appreciates Charlie’s willingness to give back to fans. 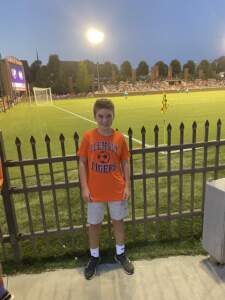 “Especially after they lost that game, that he was still talking to me was just really nice.” Chad chimed in to point out that usually after losses, Mack doesn’t even talk to him on the car ride home, so the fact that Charlie took the time to connect with essentially a stranger was especially impressive.

On the soccer field, Mack sees Charlie as a perfect role model because Clemson’s senior possesses a trait that his 10-year-old counterpart feels he could improve upon: technical ability.

“Technical work and tight spaces have always been things I’ve been working on and I’d like to improve on… Charlie is very technical and I like that about him. He can beat people one on one, and I love that. He has to work hard as an outside back in the counter-attack.”

The opportunity to give back to people from his community, as well as the Clemson fans that show up to Riggs week in and week out, is not one Charlie takes for granted. He hopes that his game and his work ethic inspire all who watch him play, and his interaction with Mack just further enforces how much impact he and his teammates can have on people.

“We don’t always think about the people that we’re playing for and the whole community of Clemson that’s behind us. We show up on gameday and see all the people in the stands and the kids waiting for autographs, and then when someone takes the time specifically to talk to me and watch me play it means a lot and it’s really special to me.”

Charlie grew up playing club soccer and eventually joined Atlanta United’s academy before beginning his collegiate career in Tigertown. This is exactly the path that Mack hopes to follow, and having now seen someone do just that, his goals feel in reach.

“Charlie’s an inspiration because I want to be there some day. It just shows that especially since he’s from where I’m from I can get there if I just watch and listen to what he’s doing.”

Just as Charlie inspires Mack, kids like Mack inspire Charlie and the rest of his teammates to always give everything they have and make sure they’re setting a proper example to the people that look up to them. When it comes to being a role model, there is no room for anything less than 100% effort, and it’s something Charlie and the entire Clemson team takes incredibly seriously.

“That’s what I want to get across to little kids that are looking to play at this level one day. I hopefully inspire them to work really hard and dedicate themselves truly to this sport… there’s always people and kids watching and cheering for us and it’s probably the best part of playing at Riggs.”

Mack hopes to make it up to Historic Riggs Field for another Clemson match this season, as the team enters the ACC Tournament on Sunday, Nov. 7. Regardless of whether he’s physically in attendance, two things can be sure: Mack will be watching closely as Charlie commands the left side of the field both defensively and in the counterattack, and Charlie will be doing the little things right, knowing well what’s at stake.