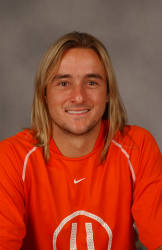 Newark, N.J. – The Major Indoor Soccer League (MISL) announced their regular season award winners today, and New Jersey Ironmen forward Frederico Moojen has been selected the 2007-08 MISL Rookie of the Year. The honors go to the Brazilian striker after a stellar first season for the expansion Ironmen.

“I am very thankful to have received this award,” Moojen stated after being notified of his accolades. “I have to share this award with everyone on the team because without them, I would never have had the opportunity to be Rookie of the Year.”

Moojen was second on the Ironmen with 22 goals in the regular season, and he added seven assists for 52 points in 27 games. He led all MISL rookies in both points and goals, and he banked two hat tricks this season. He also registered a two-point score and an assist in the New Jersey quarterfinal playoff series against the Baltimore Blast.

Moojen commented on adjusting to the MISL.

“At first I was concerned if I could adapt to the indoor game,” he reflected. “After five games, I began to have a better understanding of the game, and I continued to improve throughout the whole season.”

Moojen then made mention on the platform that brought him repeated success this season.

“I played futbal in Brazil, and that made me very comfortable with my feet,” he remarked. “The fact that I was closer to the goal indoors also created more opportunities for me to put myself in the best position to score goals and help my team. Additionally, I was also surrounded by a great coach and teammates.”

Winning awards is nothing new to the 2007-08 MISL Rookie of the Year. Following a pair of seasons at Lincoln Memorial University in Harrogate, Tennessee, Moojen was twice named the Gulf South Conference Player of the Year. In his two years suiting up for the Railsplitters, he tallied 48 goals and 109 points, and he was named the 2005 LMU Male Athlete of the Year. His 23 goals in 2005 ranked first in the nation, and his 51 points were second in the country. His solid output led the Railsplitters to their first-ever regular season conference championship that year. The following year, the Brazilian striker transferred to Clemson University and tallied 24 points including 11 goals.

While attending college, Moojen also played two seasons for the Cocoa (Florida) Expos of the USL Premier Development League (PDL). In 2004 he registered ten goals and three assists during his first season with the club, and he led the PDL in goals (18) and points (43) during his second year. In 2006 he was named the PDL Most Valuable Player after recording 18 goals for the Augusta Fireball, winning the league Goal Scoring Championship. In three seasons in the PDL, he tallied 46 goals.

Moojen logged his first action of the 2008 USL-1 season on Thursday night as his Minnesota Thunder fell to the Portland Timbers in a tight contest, 2-1. After spending the 2007 USL-1 season with the Vancouver Whitecaps, Moojen signed with Minnesota this past week. The Thunder are currently traveling to Canada to play his old team in Vancouver on Saturday night.