Over the past three seasons, Charlie Asensio has been the embodiment of both traits while occupying the left-back position within the Clemson men’s soccer team’s starting 11. Asensio, a junior from Roswell, Ga., has developed into one of the Tigers’ top defenders and a potent counter-attacking threat over the past two seasons for head coach Mike Noonan’s side.

Asensio’s quality has been on consistent display during the past two seasons, as the junior has been a part of a defensive unit for Clemson that allows on average less than a goal a game. On the other side of the ball, Asensio has become an instrumental part of the Tigers’ nationally renowned attacking efforts. The endurance-filled defender is routinely helping spring the Tigers into the attack by either delivering a perfectly weighted ball to the feet of one of Clemson’s forwards or by showing his class on the ball by skillfully dribbling down the touchline.

In the Tigers’ most recent match against Virginia Tech, Asensio’s top-class form was on full display in what turned out to be the final minutes of action.

After receiving the ball at his feet deep inside the Tigers’ half, Asensio took a positive touch towards the touchline to advance the ball into the open field and launch another attacking effort for the Tigers. After fighting off a defender as he made his way into the Hokies’ half, Asensio sprung free and only needed one touch to control the ball before delivering a floating cross into the box for an on-rushing James Brighton. Brighton’s header on goal was saved at the line, but freshman Ousmane Sylla riffled the ball home with a one-time effort. While Asensio’s name won’t show up on the box score for the game-winning goal, it was his tenacity and service that created the chance.

“I saw that I had space in front of me, so I took it… I accelerated a little bit past the defender and then picked my head up and saw James [Brighton] making a really good run in behind the backline,” reflected Asensio. “I put the ball in the box and he got a good head on it, but the keeper made a good save and Ousmane [Sylla] was there to finish it off. It was a really special moment and a really good win for the team.

Asensio and Brighton’s connection has been evident for years, as the two teammates have been close friends for many years.

“I met James when I was 12 or 13. I played against him in club soccer, but I also played with him in ODP… we finally joined each other at Atlanta United, where we played together for two years,” added Asensio. “I’ve played James [the ball] for plenty of years now so that connection has definitely built up over the years. We’ve been through a lot together.” 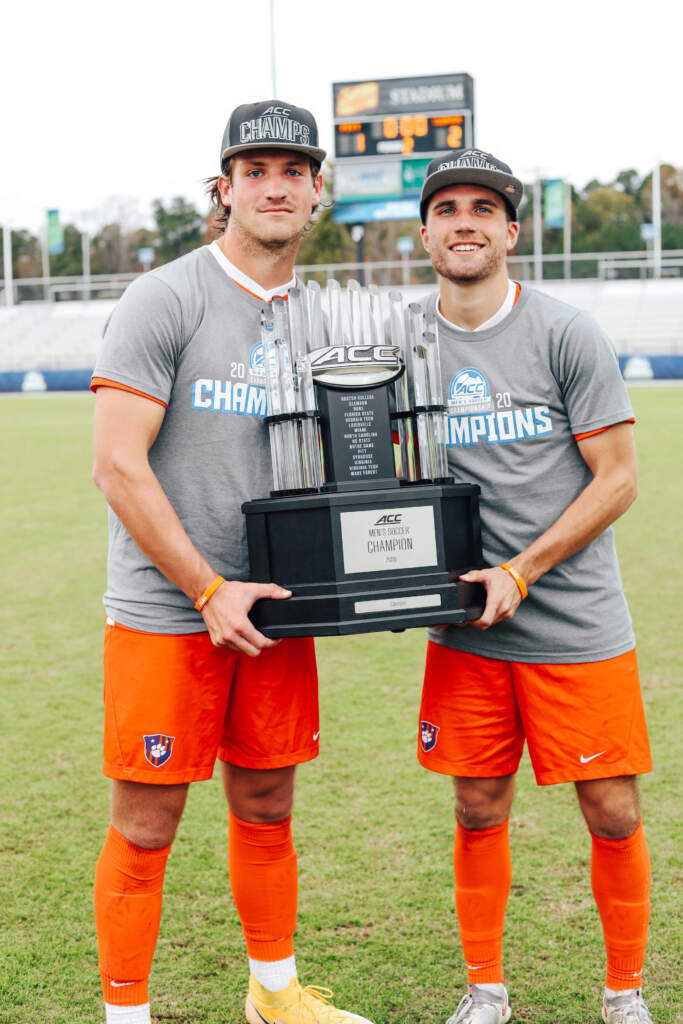 While some players can contribute sporadically throughout a season, Asensio has competed at a high level in each match during his Clemson career. Since the beginning of the 2018 season, Asensio’s first in Tigertown, the spry defender has made an appearance in all 52 of Clemson’s matches. Asensio has earned the start in 50 of the 52 matches during his career, and the veteran currently leads the team in minutes played this season with 1,206 already to his credit.

The journey to becoming such a potent threat has been a long one for Asensio, as he had to undergo numerous adjustments to his style of play early on in his time with the program.

“As a freshman, the college game was really eye-opening to me. It’s very physical, very fast-paced, and especially against the ACC, you’re playing against some of the most dynamic, physical, and talented wingers,” remarked Asensio. “My freshman year, there were a lot of learning moments, especially defensively. Coach [Mike] Noonan and coach [Phil] Jones and the rest of the staff, and even some of the older players, really helped me out on the defensive end my freshman year and throughout my career.”

“The staff has done a lot to help me. Watching extra film with coach [Phil] Jones is something that I regularly do that has helped me, and Noonan has pushed me to get higher up the field but at the same time hold my shape in the back and defend one-on-one against all these top wingers in the ACC. The staff has been incredible and has really helped my development.”

Asensio’s quality and consistency all paid off as the final whistle blew during the championship match of the 2020 ACC Tournament, a day which saw the Tigers capture their 15th ACC Championship and fourth ACC Tournament title.

“With the pandemic going on and with everything that we had to sacrifice, all that hard work that we put in and the hard work of the guys that came before us… that feeling of raising the trophy after all that it took, it was something really special,” Asensio added while reflecting on the moment.

Asensio’s appreciation for the players that came before him is profound, as the junior defender added, “There are so many guys I want to thank that came through this program before me that helped me out when I was a freshman. Tremendous guys like Tanner Dieterich, Cale Thorne, Patrick Bunk-Andersen, and so many more.”

The appreciation for where he has been and the skills he has going forth make Asensio a strong ambassador for the Clemson men’s soccer program. The next time Clemson takes the pitch, look for #15 to patrol the left side of the defense and launch into the attack when the moment arrives.