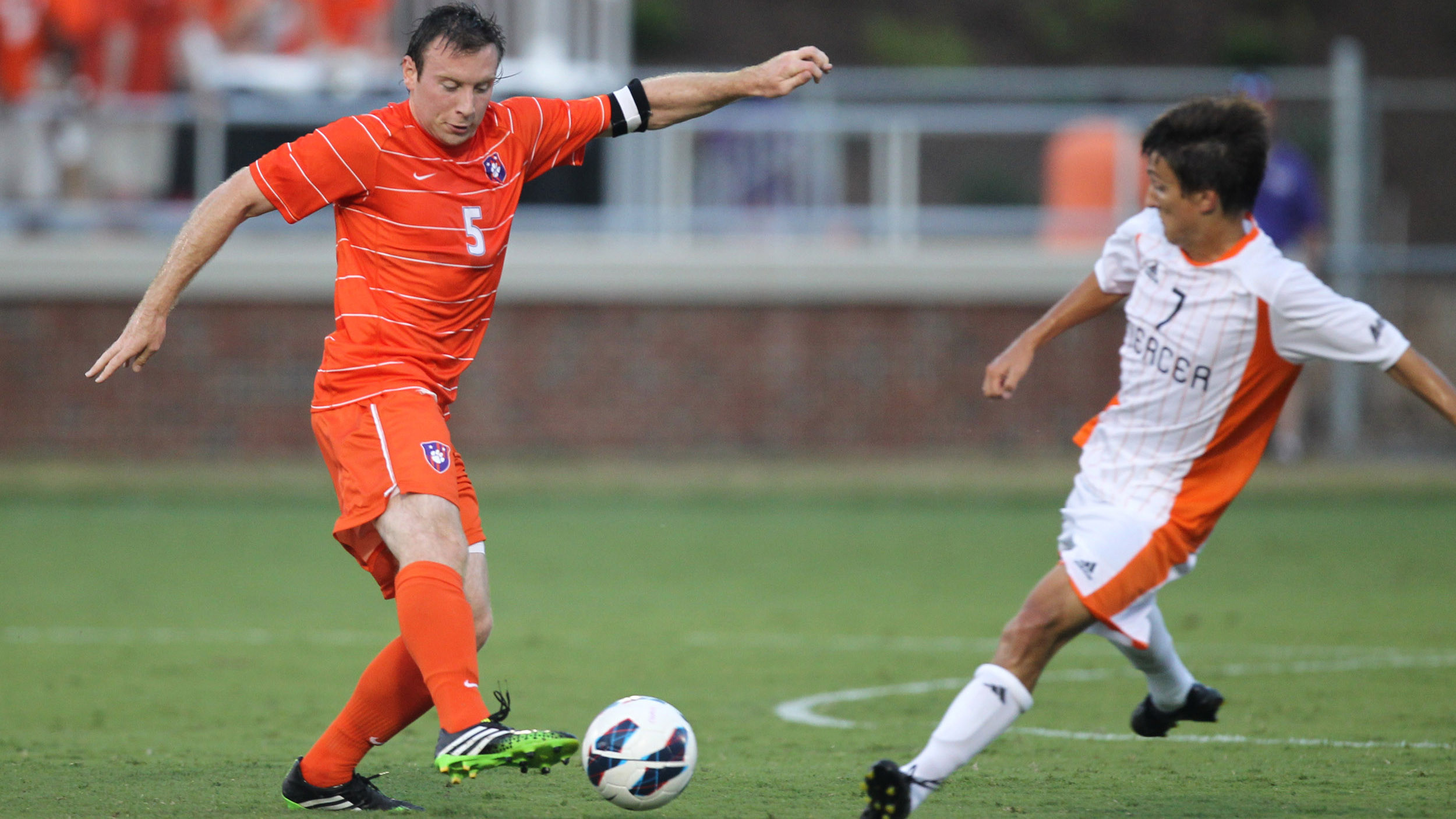 CLEMSON, SC – Mike Noonan knew when he signed Thomas McNamara he was getting an ACC-caliber player, and McNamara validated his coach’s belief by scoring one goal and assisting on another in his Clemson debut Friday night.

But the narrative isn’t quite so straightforward. Four years and nearly 800 miles separated those two events.

McNamara originally played for Noonan in 2009 during his freshman season at Brown University in Providence, RI, where he tied for the team lead with five goals, all of them game-winners, which led the Ivy League in that regard.

But the two went their separate ways the following season when Noonan was hired to take the helm of the Clemson program, and McNamara went on to a stellar career at Brown, twice being named to the All-Ivy team, including a first-team selection in 2012.

McNamara graduated from Brown having played four seasons for the Bears – the maximum eligibility allowed by the NCAA – but in the interim had sustained a season-ending back injury after taking part in just four games in 2011.

By virtue of those factors, McNamara received a medical redshirt and was allowed to transfer without sitting out a season, all of which ultimately led to Friday night, when he suited up for the Tigers and played a part in both goals during their 2-0 win over Mercer to open the 2013 campaign.

“This was just awesome,” McNamara said. “The atmosphere here, all the people on First Friday, I’ve never experienced something like this before.”

The match was the culmination of the First Friday festivities in Clemson, as a parade through downtown led fans to Historic Riggs Field, and a crowd of 6,223 – the seventh-largest in Riggs history – was on hand to witness the victory.

The Tigers (1-0) were unable to capitalize on a number of early chances and seemed to have run out of momentum before Bobby Belair‘s ball found Paul Clowes, who crossed the ball into the 6-yard box, where McNamara was waiting to direct it home with 3:53 to go until halftime.

“I just tried to work my way into the box, and I saw Paul get the ball on the near side of the box. Nobody tracked me and I just called for it, and he did a good job of getting me the ball,” McNamara said.

Having broken the deadlock just more than three minutes before the half, the Tigers doubled their tally three minutes after. Ara Amirkhanian picked up the ball in the Mercer half and lofted a pass over to McNamara, who played a through ball to Manolo Sanchez at the edge of the box. Sanchez blasted a drive into the upper corner to make it 2-0.

McNamara already seemed right at home in the Tigers’ midfield, making plays from box to box, on both ends of the pitch, as he actually played a ball from just outside the Clemson box that began the move that resulted in him assisting Sanchez’s goal on the other end.

“Tommy can play any place in the front six – he can play as a false nine, a dropped-in center forward, he can play wide, but he’s very creative and he reads the game really well,” Noonan said. “One of the things that we’re working on with him the most is his movement without the ball, and tonight you could see, the goal came from his movement without the ball and getting on the end of something through the box.”

It was quite a debut for McNamara in a Clemson uniform, not that it came as any surprise to Noonan.

“There’s more where that came from,” Noonan said. “He’s a very, very talented player. I recruited him to come to Brown, and when he told me he was coming to Brown, I knew that I had stolen an ACC-caliber player.”

A native of West Nyack, NY, McNamara comes from a family where both soccer and education are extremely important. But as he was getting ready to finish his undergraduate work ahead of schedule from Brown, McNamara wrestled with whether to take his game to the professional level or use his final year of eligibility elsewhere. He called Noonan to explore his options.

“I just said, ‘Tom, if you’re thinking about using that last year of eligibility, I know the best place to do it. Test yourself in the ACC before you take that next step,'” Noonan said.

McNamara had lived in the Northeast his entire life – with the accent to prove it – but said he grew tremendously as a player during the one season he played under Noonan and felt he owed it to his former coach to at least visit campus.

When he did, McNamara was instantly drawn to what Clemson had to offer.

“Once I saw him and talked to the team and saw the facilities, everything about the school, everything just clicked,” he said.

Now, McNamara is already into his second semester of graduate work in Applied Economics and has settled into life at Clemson, both on the field and off it. He scored two goals in a 4-0 win at Coastal Carolina in preseason action and then continued his good work in the season opener.

“I’m getting adjusted to the humidity a little bit,” McNamara said. “It’s a nice change of pace. I’ve been in the Northeast my whole life and never really experienced the South at all. It’s nice to come down here and get a completely different experience. It’s helped me grow as a person and learn something new about a new culture.”

McNamara’s next introduction to life in Clemson will come Monday, when he gets his first taste of the rivalry with South Carolina. The Tigers will host the Gamecocks at 7 p.m. at Riggs.

“I’ve heard a little bit about it,” McNamara said. “I’m definitely looking forward to it. It’s going to be the biggest rivalry that I’ve ever competed in.”