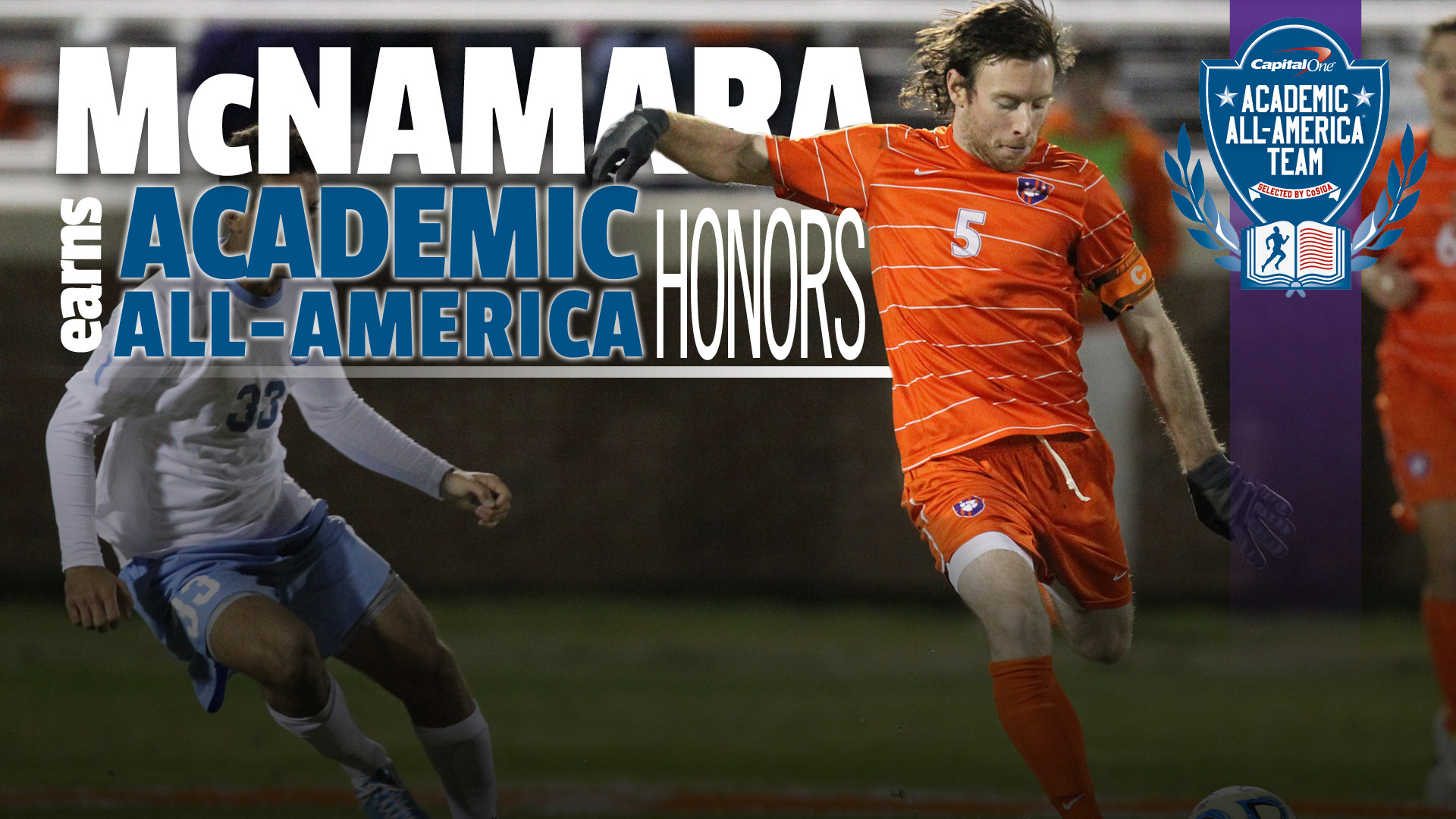 EXCLUSIVE: McNamara Shines on Field, in Classroom for Clemson

CLEMSON, SC – Anyone who attended a game at Historic Riggs Field this fall likely noticed Thomas McNamara‘s genius on the soccer pitch. Far fewer probably realized he is just as talented in the classroom.

On Tuesday, McNamara was named a first-team Capital One Academic All-American, making him the first Clemson player to garner those honors from the College Sports Information Directors of America since Jamey Rootes – now the president of the NFL’s Houston Texans – in 1987.

McNamara originally played under Clemson head coach Mike Noonan in 2009 as a freshman at Brown University, but the two went their separate ways the next year when Noonan was hired to take the helm of the Clemson program, and McNamara went on to a stellar career at Brown, twice being named to the All-Ivy team.

McNamara graduated from Brown having played four seasons for the Bears, but in the interim had sustained a season-ending back injury after taking part in just four games in 2011.

By virtue of those factors, McNamara received a medical redshirt and was allowed to transfer without sitting out a season upon graduation.

When McNamara began to consider what to do with his final year of eligibility, one of his first phone calls went to his former coach.

“When he told me he was coming to Brown, I knew that I had stolen an ACC-caliber player,” Noonan said. “He comes from a family of soccer players; his mom’s a teacher. They are all about academics, and I was happy Tommy came to Brown.

“I followed his career pretty closely and knew that he had the extra year, and I just said, ‘Tom, if you’re thinking about using that last year of eligibility, I know the best place to do it. Test yourself in the ACC before you take that next step.'”

McNamara passed that test with flying colors, as he scored four game-winning goals in leading the Tigers (11-7-3) to the NCAA Tournament for the first time since 2006.

The West Nyack, NY, native became the first Clemson soccer player in seven years to be named first-team All-Atlantic Coast Conference, as he led the Tigers with seven goals and eight assists.

“It’s a nice change of pace,” he said of the decision to come to Clemson. “I’ve been in the Northeast my whole life and never really experienced the South at all. It’s nice to come down here and get a completely different experience. It’s helped me grow as a person and learn something new about a new culture.”

McNamara is the only graduate on the Capital One Academic All-America first team. He carries a 3.40 GPA in applied economics after completing his undergraduate work with a degree in economics from Brown.

“It was great to just get one more year of college soccer before it was all over, and I was just so thankful to do it here at Clemson and with the guys and the coaching staff that I was doing it with,” McNamara said. “It was everything I could have asked for it to have been.”