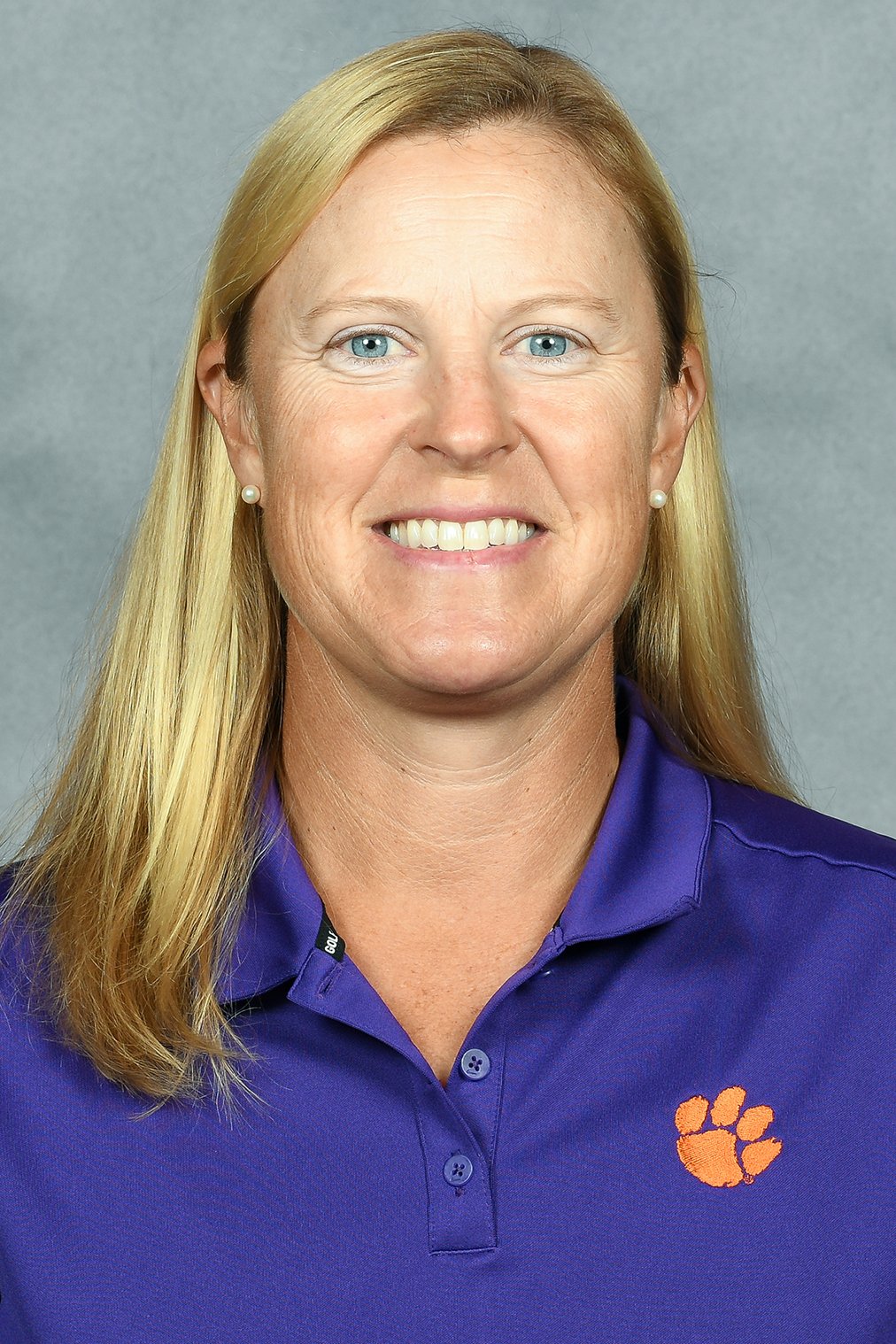 It is no surprise that Clemson has seen its program grow nationally in the four years Kelley Hester has been in charge of the program.   In 20 years and 194 tournaments as a head coach she has 18 wins, 33 top two finishes and 89 top fives.   She has taken teams to 15 regionals, had six top 20 national finishes at four different programs, coached 32 all-conference players and 17 All-Americans.

Nothing documents her success more than the fact that she is the only coach in NCAA Division I history to take four different programs to the NCAA National tournament and record at least one top 20 finish at four different schools.

Hester has had a remarkable first four years as Clemson head coach.  She has taken the Tigers to the NCAA Tournament each year there has been a tournament (none in 2020 due to COVID19), and the program has had its best two finishes at the ACC Championship in school history.  The program has also captured its first two tournament victories.

Players have flourished under Hester’s leadership as Clemson has had five first-team All-ACC selections and four medalist honors.  Alice Hewson, who closed out her career as the first four-team All-ACC player in Clemson history in 2019, was also named an All-American and was a four-time selection to the All-ACC Academic team.  Another highlight was Hewson’s top 10 finish at the inaugural Augusta National Women’s Amateur in April of 2019.  Hewson is now a professional on the  European tour and already has a victory on her resume.

The abbreviated 2019-20 season saw the Tigers record a second-place and  third-place finishes in two tournaments with national fields.  The Tigers played the #22 schedule in the nation according to Golfweek/Sagarin, the third straight year Clemson played a top 25 slate.   Ana Paula Valdes completed her four-year career as one of the programs most successful players on and off the course.  In 2020 she became the first women’s golf student-athlete to win the ACC’s Weaver-James-Corrigan Scholarship.

Clemson advanced to the 2019 NCAA Regional in Auburn, Ala, after winning nearly 63 percent of its head to head play during the regular season (81-47-5) against a schedule ranked 22nd most difficult in the nation.  The season included a third-place finish at the Clemson Invitational against a national field, and a fourth-place at the Battle at the Beach in Mexico where Tiger junior Ana Paula Valdes won medalist honors.

Hewson became the second Clemson golfer to win medalist honors in 2018-19 when she took the Icon Invitational in Houston by three shots against another national field. The native of the United Kingdom left Clemson with 46 school records.

Hester started four freshman over the course of the 2018-19 season and the group was led by freshman Ivy Shepherd, who finished as a first-team All-ACC player.  Shepherd showed her potential with an 11th place finish at the Ruth Chris Tar Heel Invitational where she beat eventual National Champion Maria Fassi by two shots and Augusta National Amateur Champion Jennifer Kupcho by six shots.  Shepherd was Clemson’s top player as well in 2019-20 and enters her junior year with the second best stroke average in Clemson history.

In 2017-18, Clemson won the Houston-Dickson Tournament in Houston, Texas.   The Tigers also finished second at the Schooner Classic in Oklahoma, third at the Clemson Invitational and third at the ACC Tournament in Greensboro.  That was the best finish for the Clemson program at the league event in the five years of Clemson women’s golf.   Clemson finished sixth out of 18 teams at the NCAA Regional in Tallahassee, losing in a playoff for the final national spot to Wake Forest.

While Clemson did not make the national tournament, Hester’s Tigers were ranked 24th in the final Golfstat national rankings and finished 26th according to the Golfweek rankings.  Hewson won the Clemson Invitational in dramatic fashion with birdies on the last two holes, as she set a school season record for stroke average at 72.10.

Hester’s first Clemson team won the UCF Challenge in Orlando, Fla. in February of 2017, the first team win in school history.  In April the team finished fifth at the ACC Tournament, at the time the best in school history.

Three weeks later, Clemson finished a program best fifth-place at the NCAA Regional in Athens, Georgia.  That was an emotional accomplishment for Hester because she played her college golf on the very same University of Georgia Golf Course.

The Tigers were seeded 10th entering that 2017 regional, but a second-round score of six-under-par 282, improved Clemson from 11th place to fourth in one day.  A final round 298 led to the fifth-place finish and the first invitation to the National Tournament in Clemson history.

The performance at the regional made Hester the first coach in NCAA Division I golf history to take four different programs to the NCAA National Tournament.  She had also accomplished the feat at Arkansas, Georgia and Furman.

Hester became just the 13th coach in any sport to take a Clemson team to the NCAA tournament in the first year of a coaching tenure, and the first to take a women’s program to a top 20 final ranking in a rookie season since 2001.  All this was accomplished with a team that did not have a senior in its lineup in postseason play.

Ranked 39th nationally by Golfstat entering the 2017 NCAA Regional, the Tigers finished the season with a tie for 20th at the NCAA National Tournament at Rich Harvest Farms in Sugar Grove, Illinois.  The Tigers tied fifth-ranked Florida State on the challenging course, giving the program its first top 20 final ranking.  It meant Hester had led two different programs to top 20 national finishes in consecutive years, as she had led Furman to a No. 20  finish at the 2016 NCAA Championships in Oregon.

Each year she was named East Regional Coach of the Year by the LPGA.

Throughout her 20-year head coaching career, Hester has recruited and developed some of the top talent in today’s game. From 2005-08, Hester coached Stacy Lewis at the University of Arkansas where she was the 2005 SEC Freshman of the Year, 2007 National Champion and 2008 SEC Championship Individual Medalist and Player of the Year.

Breaking onto the LPGA Tour in 2009, Lewis has won nearly $13 million, 12 LPGA events, including two majors.   She has been ranked number-one in the world on two different occasions, including for 21 weeks in 2014.

In 2016, Hester guided Furman to a 20th place finish at the NCAA Championship after finishing fourth at the NCAA Bryan Regional. One of Hester’s first recruits at Furman, Taylor Totland placed 20th among the nation’s individuals in 2016 after qualifying for the NCAA Championships the year before.  She is now a professional and won a Symetra Tour event in 2020.

Hester was named the 2016 Southeast Coach of the Year by the LPGA and was one of six finalists for the National Coach of the Year honor by the same organization.  She obviously left the Furman program in great shape as the Paladins finished in the top 12 in the nation each of the first two seasons after she left the program.  Her last recruiting class included Natalie Srinivasan, who was named the WBCA National Player of the Year in 2020.

While claiming her first SoCon Championship in 2015, five of Hester’s student-athletes were honored on the All-SoCon Team, while three of her newcomers were named to the SoCon All-Freshman Team. Prior to the 2015 season, Hester led Furman to consecutive second-place finishes at the SoCon Championships.

Before joining Furman, Hester was the head coach of her alma mater at the University of Georgia for five seasons after five years at Arkansas and one year of starting the program at UNLV.

In her time at Georgia, the Bulldogs made five-straight NCAA Regional appearances and went on to place 10th and 15th at the 2008 and 2009 NCAA Championships, respectively. In 2009, Hester was named the LPGA National Coach of the Year. Along with her team’s consistent success, Hester recruited, coached and developed Marta Silva Zamora, who was named National Player of the Year in 2011.

Hester was a four-year letter-winner and three-time All-Southeastern Conference selection for Georgia from 1993-96. She was a member of Georgia teams that placed fourth at the 1993 NCAAs and captured the 1993 and 1994 SEC championships. Individually, she recorded 21 top-20 finishes in 40 tournaments during her four-year career.