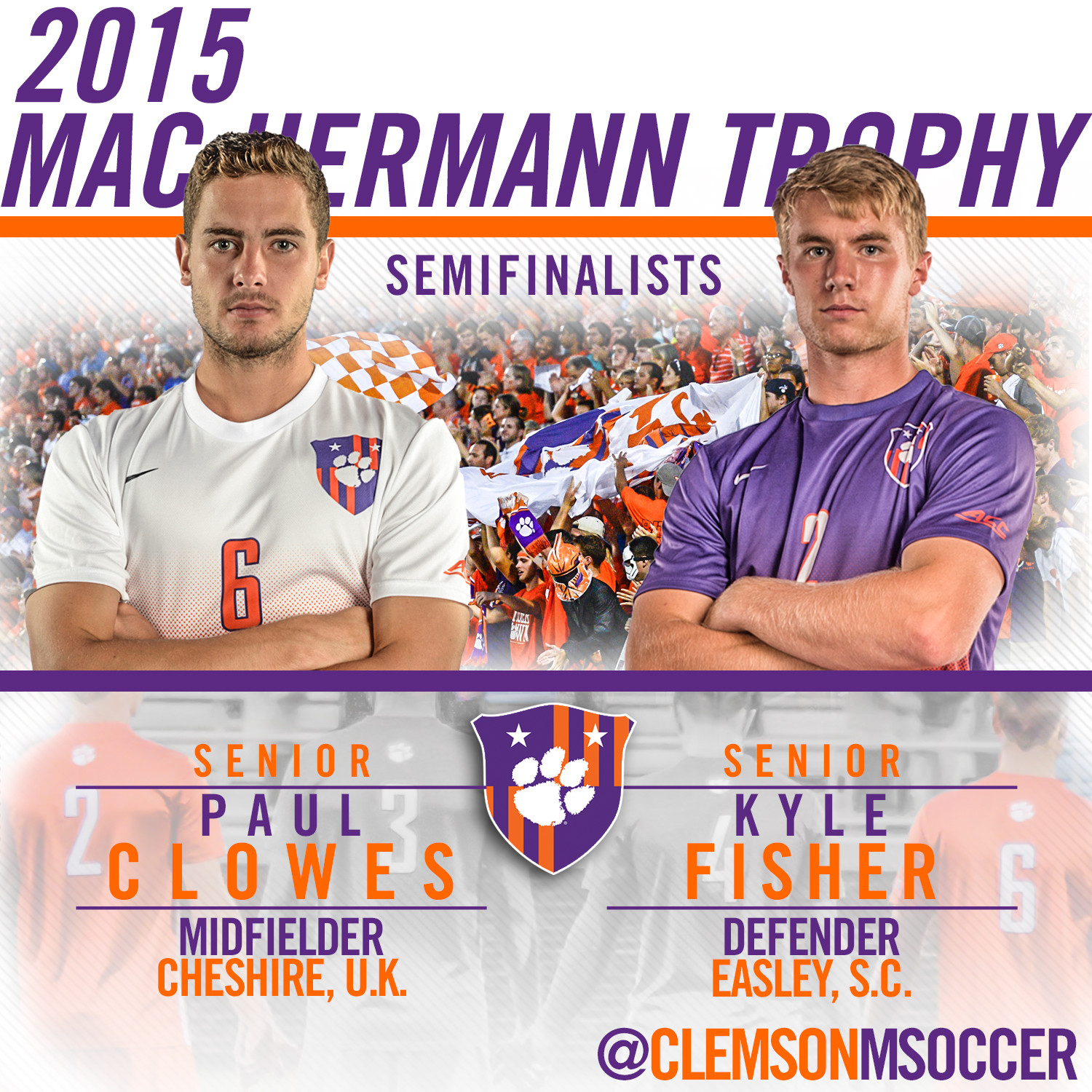 CLEMSON, S.C. – Paul Clowes and Kyle Fisher, senior co-captains on the No. 2 Clemson men’s soccer team, have been named semifinalists for the 2015 Missouri Athletic Club’s Hermann Trophy, the highest individual award presented in college soccer. Clowes and Fisher are two of 15 players on the list of semifinalists, and Clemson is one of just three programs with two semifinalists, joining Creighton and Stanford.

Clowes was honored as the ACC’s Midfielder of the Year and was also named to the ACC All-Tournament Team in 2015. The native of Cheshire, United Kingdom, has started all 21 games this season in the midfield for the Tigers, playing 1,863 minutes, more than any other field player on the team. He has provided consistent, solid play as a holding midfielder, a position which often goes unnoticed, throughout his Clemson career, screening the Tiger defense as well as organizing the offense. Clowes has two goals on the season, scored on just three shots taken in Clemson’s first two wins this year, after which he was named ACC Offensive Player of the Week. He is a team leader in the classroom as well, and was named a CoSIDA Academic All-District 4 selection earlier this fall.

A product of Easley, S.C., Fisher was named the ACC Defensive Player of the Year in 2015. He has played in and started 17 games on defense for the Tigers this season, and has played a significant role in the team’s defensive success, not only in 2015, but over the past four years. The Clemson defense has held opponents to just 17 goals in 21 games this season, for a 0.79 team goals against average. Opponents scored just 12 goals in the 17 games Fisher played in, as opposed to five goals scored in the four games he missed. Fisher has started 80 games in his collegiate career at Clemson, a number that puts him in a tie for sixth in program history in terms of career starts.

Later this month, the top three vote-earners from the list of 15 semifinalists will be named finalists for the MAC Hermann Trophy. The winner will be announced at a ceremony in January 2016. Clemson has had two Hermann Trophy winners in men’s soccer, Bruce Murray in 1987 and Wojtek Krakowiak in 1998. The Tigers have had seven players named Hermann Trophy finalists a total of eight times in school history, most recently Dane Richards in 2006.

Clowes, Fisher and the Tigers host No. 10 National Seed Maryland in the NCAA Elite Eight this Friday, Dec. 4 at 7 p.m. at Historic Riggs Field. Tickets are available for sale on ClemsonTigers.com.

ABOUT THE AWARDThe NSCAA administers the Missouri Athletic Club’s Hermann Trophy, the highest individual award presented to a player in intercollegiate soccer. The NSCAA’s Division I College Services members serve as the official voting body for the Hermann Trophy. For more information about the history of the award, visit: http://www.nscaa.com/awards/college/mac-hermann-trophy.

Men's Soccer
No. 8 Clemson Hosts Denver in NCAA Tournament Round of 32