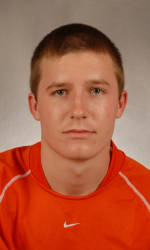 Drake has five goals and three assists this season. He also has three game-winning goals this season and all three of these game-winners were against top 25 teams, Virginia (4th), Furman (14th), and Boston College (6th).

Clemson, the number seven seed will play second-seeded Wake Forest at 8:00 p.m. This winner of this match will meet the winner of the Duke-North Carolina match on Friday, November 16.

Clemson has a 7-10-1 record overall and finished with a 2-6 record in league play.