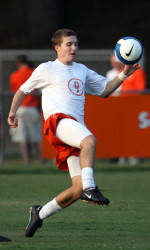 He played in 19 matches for the Tigers and started 13 in his freshman season last fall.