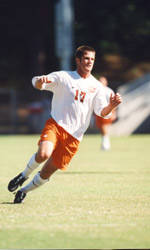 Rhyne, a sophomore from Alpharetta, Ga., came off the bench and led the Tigers to a 2-1 win over No. 13 South Carolina. Rhyne recorded the winning goal in the match as well as tallying an assist for a total of three points on the evening.

Sealy, a freshman hailing from Petit Valley, Trinidad, was involved in all three of the Demon Deacon goals against NC State. He recorded two goals and one assist in the 3-1 Wake Forest victory. The Deacs also posted a win against UNC Greensboro earlier in the week.