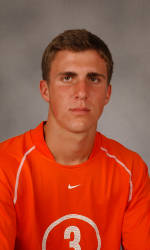 Clemson’s Greg Eckhardt To Play With the U.S. U-20 National Team

CHICAGO – U.S. Under-20 Men’s National Team head coach Thomas Rongen has named 18 players who will travel to Manchester, England for a week-long foreign training camp. The team will play three friendlies against the reserve teams from EPL squads Bolton (May 7), Manchester United (May 8) and Liverpool (May 10).

Eckhardt is a rising junior at Clemson. He is a defender from Orange Park FL. He has played in 36 matches for Clemson and has started each time. Last season, he had one goal and two assists for four points.

The trip is the third foreign training camp, and fifth overall, for Rongen’s squad as they prepare to qualify for the 2009 FIFA Under-20 World Cup in Egypt. Qualifying will take place early next year.

Returning to Rongen’s squad for the first time since the 2007 FIFA Under-20 World Cup is goalkeeper Brian Perk, who made seven saves in the USA’s Round of 16 victory over Uruguay in last summer’s tournament in Canada. Joining him will be veterans of the Under-17 World Cup in Billy Schuler and Sheanon Williams, who are both finishing up their first semester at the University of North Carolina.

Though Chivas USA’s Jorge Flores is the only domestic professional player on the roster, goalkeeper Bill Hamid and midfielder Matt Kassel are part of the Development Academy programs of the D.C. United and the New York Red Bulls, respectively. Real Colorado’s Taylor Kemp and IMG Academy’s Zarek Valentin round out the Academy contingent.