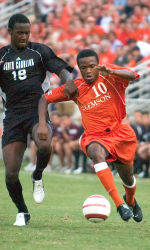 GREENSBORO, N.C. – Clemson’s Dane Richards was named Atlantic Coast Conference Men’s Soccer Player of the Week after leading the Tigers to a 4-3 win over No. 24 South Carolina last Friday to open the 2006 season.

Richards scored two goals in the last 18:30 of the match, including the game-winner at the 82:28 mark, leading fifth-ranked Clemson to the season-opener win in Columbia, S.C. In addition to Richards’ two goals, the senior finished the match with one assist, which knotted the score 2-2.

After just one weekend of non-conference play, Richards leads ACC players in several statistical categories. Richards leads in goals per game (2.00), points per game (5.00), game-winning goals (1.00), and is tied with Charlie Davies of Boston College for shots per game (6.00).

Richards returns for his senior campaign as the Tigers’ leading scorer from 2005. He tallied 12 goals and eight assists for 32 points last season. The All-ACC performer has also been named to the 2006 Preseason MAC Hermann Watch List.

Clemson will return to action on Tuesday, August 29, as the Tigers welcome Georgia State for a 7 p.m. contest.