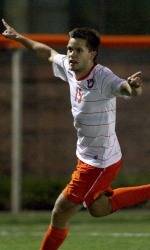 Clemson’s Brynjar Benediktsson is Named All-South by the NSCAA

The native of Hafnarfjordur, Iceland was named National Player-of-the-Week as well as ACC Player-of-the-Week in his one goal and one assist performance in Clemson’s victory over number-one ranked Maryland on October 28. He was also named to the All-ACC freshman team.