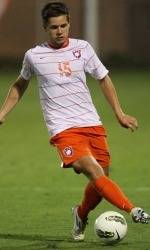 Benediktsson was instrumental in leading the Tigers to a 2-1 win over top-ranked Maryland last Friday night. He becomes the first freshman to win this NSCAA honor this season.

Benediktsson scored the Tigers’ first goal and assisted on the game-winner with 5:35 remaining in the match as Clemson prevailed in the ACC contest despite playing a man down for the final 67 minutes and 31 seconds following a red card.

He also logged 100 minutes and attempted three shots earlier in the week as the Tigers battled East Tennessee State to a 1-1 tie. Benediktsson was also named the ACC Player-of-the-Week as announced by the league’s office Tuesday.

A freshman from Hafnarfjordur, Iceland, Benediktsson is Clemson’s leading scorer with seven goals and four assists for 18 points.

Clemson will play at Virginia Tech on Thursday night in the regular season finale. Clemson will participate in the ACC Tournament next week. The Tigers are 7-8 this season and 3-4 in league play.