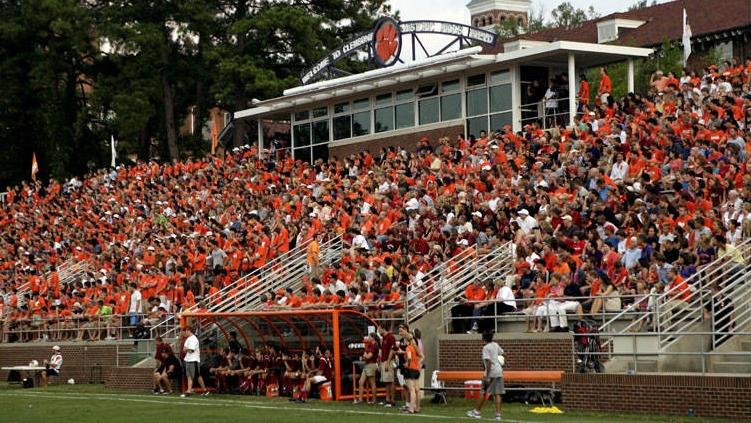 CLEMSON, SC – The Clemson men’s soccer team will play host to 14th-ranked Wake Forest in the ACC opener for both teams Friday night at 7:30 pm at Historic Riggs Field.Clemson has a 1-2-1 record overall this season.  Wake Forest has a 3-0 record overall this season.  The Demon Deacons are ranked 14th by the Soccer America poll and 15th in the NSCAA Coaches’ poll.A feature of this match will be the conclusion of the First Friday Parade at Historic Riggs Field prior to the match.Organizers are attempting to break the Clemson men’s soccer regular-season attendance record of 7,423 on Friday.  The school set the record with 7,423 fans on September 2, 2011, against the University of South Carolina as the Tigers won 2-0.This will be the 38th match between the two schools in men’s soccer.  Wake Forest leads the overall series 18-16-3.  The series started in 1980, and the Tigers lead the overall series 8-7 when playing at Historic Riggs Field.Clemson University Athletic and Public Safety Officials are encouraging fans to arrive early and be safe as they approach the Clemson area as some streets will be closed due to the First Friday Parade.Around 7,000 fans are expected for the match on Friday.  The First Friday Parade will also be in progress beginning at 6:00 p.m. starting at the intersection of Cherry Road and the Old Greenville Highway near the President’s Home.  The parade will continue towards the downtown area and will conclude at Historic Riggs Field around kickoff time.  Roads around the downtown area will be closed due to the parade.Fans attending the game are encouraged to come to the Clemson area by using Perimeter Road and using the Avenue of Champions or Williamson Roads to go to parking areas for the soccer match adjacent to Historic Riggs Field.  Additional lots near the football stadium will be used for the overflow crowd.A number of t-shirts and scarves will be given away before and during the match.  Admission to the Clemson-Wake Forest soccer match will be free.