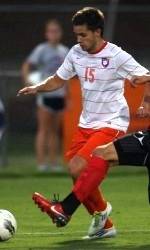 Clemson Will Play Host to Virginia on Friday Night

CLEMSON, SC – The Clemson men’s soccer team will play host to ACC foe Virginia at 7:00 p.m. on Friday at Historic Riggs Field. The Virginia match was originally scheduled to start at 6:00 p.m., but was changed to accommodate television. Fox Sports South will carry the game live as part of the ACC Soccer Television package.

Clemson is led in scoring by Brynjar Benediktsson with four goals and two assists for 10 points. He has two game winning goals to his credit this year. Austin Savage had three goals and one assist for seven points. Amadou Dia has two goals for four points. Iain Smith leads the Tigers in assists with three.

This will be the 53rd meeting between Clemson and Virgina on the soccer field. The Cavaliers lead the overall series 26-21-5. The last four meetings have been decided by one goal. In the last seven meetings, Virginia has won four of those matches. In 2009, Clemson defeated the 11th-ranked Cavaliers 1-0, in Charlottesville, VA. Last season, Virginia defeated the Tigers 1-0 at Clemson, SC. In matches played at Clemson, SC the Cavaliers lead 11-10-2.

Brynjar Benediktsson scored with only :10 seconds left in the second overtime period in leading Clemson to a 2-1 victory over Gardner-Webb at Clemson, SC on September 27.

The latest goal scored in regulation to win a match was Jimmy Glenn’s goal at the 89:59 mark against Virginia as he led the Tigers to a 2-1 win over the number-one ranked Cavaliers on October 10, 1993, in Charlottesville Virginia.

The latest Clemson goal ever scored without time constraints was Henry Abadi’s goal at the 139:12 mark as he led the Tigers to a 1-0 win over South Florida on December 2, 1973 in a NCAA Tournament match.

Youth Soccer Month is designed to raise awareness of Youth Soccer and the benefits of playing the game. It is also used to emphasize soccer as the number one youth participation sport in America and a leading contributor to the healthy lifestyle of millions of American families.

Youth soccer month bring kids and families of all ages and all abilities together for fun, friendship and fitness. And it also highlight the various programs available to children interested in participating in soccer, including inner-city, special needs, recreational and elite soccer programs.