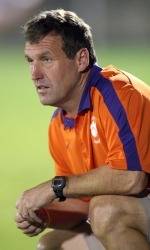 Clemson has a 4-7-0 record overall and 2-4 in the ACC. The Tigers upset 14th-ranked Boston College 2-0 last Friday night.

The Tigers are led in scoring by Brynjar Benediktsson with four goals and three assists for 11 points.

Furman will enter the match with a 10-2-3 record overall. Furman is led in scoring by Coleton Henning with six goals and three assists for 15 points.

This will be the 52nd meeting between the two schools on the soccer field. Clemson leads the overall series 39-9-3 overall. The two schools first met on February 14, 1934 in the state of South Carolina’s first collegiate soccer match.

Nick Burton netted an overtime goal to lift Clemson to a 1-0 victory over Furman in front of a crowd of 2,726 at Stone Stadium in last season’s meeting between the schools.