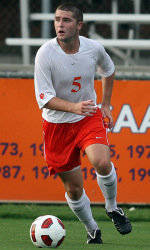 Clemson Will Open 2010 Season at South Carolina on Friday

CLEMSON, SC – The Clemson Men’s Soccer team under new Head Coach Mike Noonan will open the 2010 season Friday at South Carolina in a match to be televised nationally on the Fox Soccer Channel. Match time is set for 8:00 p.m.

This will be the season opener for both teams. Noonan, who has been at Brown for the past 15 seasons, has 10 letterwinners and five starters returning from the 2009 squad.

This will be the 38th meeting between Clemson and South Carolina on the soccer field. The Tigers lead the overall series 22-14-1. In games played at Columbia, Clemson is 10-6-1 over the years. The series began in 1978.

“First of all, I am very honored to be at Clemson,” said Head Coach Mike Noonan. “There’s a large amount of tradition here at Clemson. We are excited to start the season. The team is looking forward to the start of the season and we are improving each day. We still have a lot of work to do, but the team works hard, and we are looking forward to the start of the 2010 season. The match with South Carolina is a great rivalry and has been for many years. I’m excited to be part of it, and I know our players enjoy playing in this match.”

This will be the first time that the Clemson-South Carolina men’s soccer match has ever been televised live on network TV.