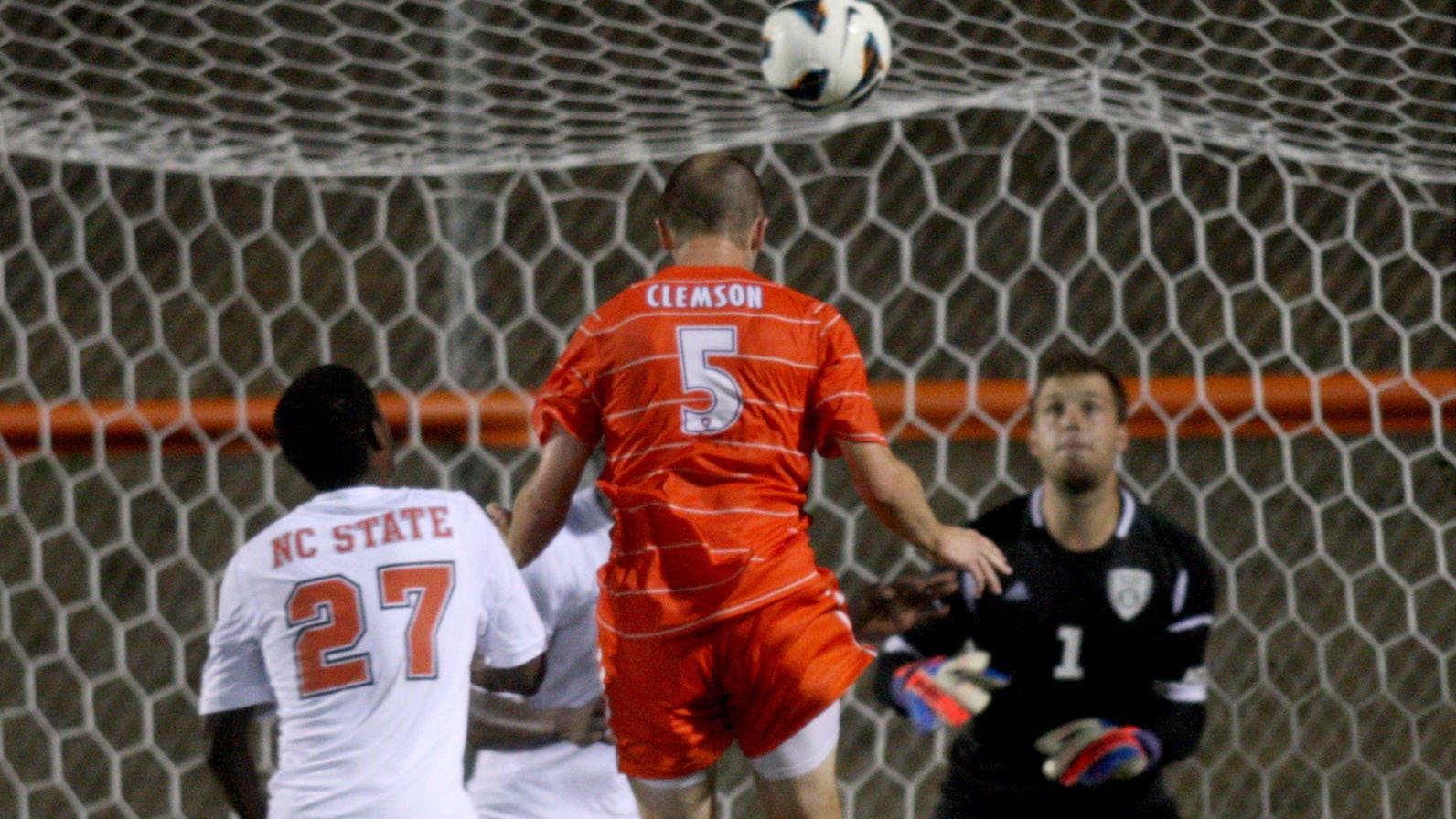 CLEMSON, SC – Manolo Sanchez assisted on both Clemson goals in leading the Tigers to a 2-1 overtime upset win over 17th-ranked NC State in a men’s Atlantic Coast Conference soccer match at Historic Riggs Field in Clemson, SC Friday night.With the win, the Tigers are now 2-5-2 overall, 1-1-1 in the ACC.  N.C. State is 6-3 overall and 0-2 in league play after tonight’s loss.Early in the first half, N.C. State had a chance to score.  In the sixth minute of play, N.C. State’s Moritz Steidten sent a pass to Monbo Bokar that set up a one-on-one situation with the Clemson goalkeeper Chris Glodack.  Glodack charged out of the box and saved the shot taken by Bokar to keep the game scoreless.N.C. State scored midway in the first half in the 22nd minute.  Jonathan Ray took a shot, but it was blocked by a Clemson defender.  The ball trickled to Zabarie Kollie.  Kollie knocked the ball in the goal near the right post from close range in giving the Wolfpack the early 1-0 lead.In the 24th minute of play Clemson threatened to tie the score, Sanchez had a one-on-one situation with the Wolfpack keeper, Fabian Otte.  Sanchez took a shot near the right post from six yards out, but it was saved by Otte.For the half, both teams had three shots on goal.  In the second half, N.C. State only had one shot on goal and it happened in the 83rd minute.  Monbo Bokar took a pass from Matt Ingram.  Bokar drove in the box and took a shot that was saved by Glodack.In the 84th minute, Clemson threatened to tie the score.  Preston Gayton took a corner kick from the right.  Amadou Dia took a head shot for the Tigers, but it was saved by Otte.Clemson scored in the final minute of regulation (89:12) to send the game into overtime.  Kyle Fisher took a shot that hit the corner of the crossbar and the left post.  The ball deflected back to Sanchez near the right post.  Sanchez headed the ball to the middle and Austin Savage headed the ball in from seven yards out over the Wolfpack goalkeeper Fabian Otte.The Tigers scored the golden goal in the first overtime period.  Sanchez sent the ball to Preston Gayton to the right inside the box.  Gayton crossed the ball into Clemson, SC native, Ara Amirkhanian who fired the ball into the netting from close range to give the Tigers the win.For the match, Clemson had 15 shots compared to N.C. State’s nine.  The Tigers had six shots on goal compared to the Wolfpack’s 5.  Clemson had six corner kicks to N.C. State’s three.  Glodack of Clemson finished with four saves and Otte of N.C. State finished with four.Tonight’s win marked the fourth victory over a ranked opponent for Clemson Head Coach Mike Noonan who is in his third season at Clemson.”I was disappointed that we gave up a goal in the first half,” said Clemson Head Coach Mike Noonan.  “It was a good play by N.C. State.  They were in the right place at the right time.  It’s been that kind of year for us.  The ball deflected off one of our defenders and it came right back to one of their players.  I was real proud of the team.  They came out in the second half and they earned the tying goal.  We have worked hard in the past few days.  I was happy with the resiliency of the team.  Our first goal may not have been the prettiest goal ever, but we will take it,” said Noonan.”I told the players before the game that we all need to step up in our games.  We must continue to build from this win.   We must learn to be consistent with our effort.  We had a great win over a good N.C. State team.  We will continue to work hard and prepare for the rest of our matches,” said Noonan.Savage scored his first goal of the season as he sent the match into overtime.”The ball came across the goal, and I jumped at the right time and hit the ball in the netting,” said Austin Savage on his game-tying goal that sent the match into overtime.    I was fortunate to be there at the right time.  The entire team laid it on the line.  We needed this win, and it feels so great,” said Savage.Amirkhanian scored his first-ever game winner in a Clemson uniform.  He played at nearby Daniel High School.”We have been working hard in practice,” said Clemson, SC native Ara Amirkhanian who scored the winning goal.  “We came together as a team and this was a great team win.    I think our luck has changed.  I was there at the right time, when the ball came off the cross and it hit the keeper and I was there to knock it in the goal.”Clemson will play at Virginia on Friday night in Charlottesville, VA in the Tigers’ next action.  N.C. State – Zabarie Kollie (Jonathan Ray)  21:53Clemson – Austin Savage (Kyle Fisher, Manolo Sanchez)  89:12Clemson – Ara Amirkhanian (Manolo Sanchez, Preston Gayton) 98:34Shots:  Clemson 15, N.C. State 9Corner Kicks:  Clemson 6, N.C. State 3Saves:  Chris Glodack (CU) 4, Fabian Otte (NCSU) 4Fouls:  Clemson 20, N.C. State 13Attendance:  1,412