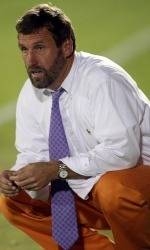 CLEMSON, SC – The Clemson Men’s Soccer team will play host to Adelphi on Friday, at 5:00 p.m. at Historic Riggs Field.

The Tigers are 4-8 overall and 2-4 in conference play. Clemson is coming off of a 3-2 loss to 23rd-ranked Furman. Clemson is led in scoring by Brynjar Benediktsson with five goals and three assists for 13 points. He also has scored two game-winners this season. Austin Savage has four goals for the year.

The Tigers’ goalkeeper Cody Mizell has 34 saves for the season. He is second in the latest ACC statistics for most saves.

Adelphi is 6-6-1 overall and has a record of 3-0 in the Atlantic Soccer Conference. The Panthers had a 1-0 win over Bucknell University on October 18 in their latest action. Brandon Stoneham leads Adelphi with two goals and three assists for seven points.

This will be the second meeting for the two teams on the soccer field. Clemson won the only previous match 4-1, in 1990.