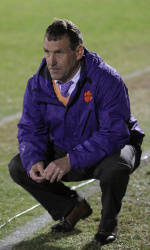 CLEMSON, SC – The Clemson men’s soccer team is now awaiting word of a possible NCAA Tournament bid. If history has a way of repeating itself, Clemson has a strong case in hand. The selection show will be Monday, November 14 and will be online only this year, at www.NCAA.com. It will take place at 4:30 p.m. EST.

The Tigers took another step in their turnaround under second-year coach Mike Noonan Tuesday night when they went to Durham, NC and battled Duke to a 0-0 draw in the quarterfinals of the ACC tournament.

By the margin of a save by Duke goalkeeper James Belshaw in the sudden death round of penalty kicks, the Blue Devils advanced to the ACC tournament semifinals over the Tigers.

The NCAA selection committee will review the Tigers’ overall 8-8-2 record and 4-4-1 ACC mark and determine whether they¹re worthy of being included in the 48-team field Monday.

“We have put together a very strong second half of the season and we are now as healthy as we have been all year,” said Clemson Head Coach Mike Noonan. “Our recent results against top ranked teams, home and away, should put us in strong consideration for an at Large NCAA bid.”

The following are some facts that are in the Tigers’ favor: * Wins over 14th-ranked Boston College and number one-ranked Maryland in 2011. The Tigers had a 4-0-2 mark in the stretch run of the season. * Since 2006, any ACC team listed in the top 37, has made the ACC Tournament. In the latest RPI, Clemson is 37th. * Any team with a winning ACC record (.500 or above) has received an NCAA Bid except two squads since the field was expanded to 48 teams in 2001. Wake Forest in 2010 (Did not have a winning record overall) and Boston College in 2006 * Unbeaten in the last six matches, this current 4-0-2 streak includes a 2-1 televised victory over No. 1 Maryland, a win on the road against Virginia Tech, and a scoreless ACC tournament draw against Duke, which features one of the nation’s most potent attacks. It was the first time that the Blue Devils had been shut out since losing their ACC opener 1-0 to Virginia on Sept. 9. * In arriving at the ACC tournament with an 8-8-1 record and a 4-4 conference mark, Clemson recorded its first overall record of .500 or better since 2006, while the four ACC victories were the Tigers’ most since 2000. * Not in the past 30 years has a Clemson team that won four regular-season ACC matches been left out of the NCAA tournament field. In fact, in the history of the program, it¹s happened just once. That was in 1980, when coach I.M.Ibrahim’s 12-3-2, 4-1-1 team was not invited to play for the national championship. * Through the years, some of Clemson¹s most battle-tested teams have fared well in NCAA tournament play, despite entering the playoffs with less-than-dazzling records. * The Tigers were literally the last team invited into the tournament in 1987, when they put together a five-victory run that resulted in the program’s second NCAA title in four years. * Nor was Clemson among the top-seeded teams when it won its 1984 title. The Tigers were sent on the road to NC State for a first-round match, and then were paired against No. 1, previously-unbeaten Alabama A&M in the second round. * The Tigers earned an invitation to the 2005 NCAA tournament despite having a 2-4 regular-season ACC record, and Clemson went on to advance to the Final Four. * In handing out NCAA invitations this year, the selection committee will have to sort through the ACC’s regular-season logjam. Behind North Carolina and Maryland, the next five teams finished within one game of each other ¬ Duke, Virginia and Wake Forest at 4-3-1 and Clemson and Boston College at 4-4.

A Very Strong Conference: * In 2005, when Clemson reached the NCAA’s Final Four, the Tigers were among a conference-record eight ACC teams invited to the tournament. * The ACC had seven teams selected in both 2006 and 2009, six in 2007 and 2008, and five in 2010. * ACC teams have won four of the past six NCAA titles, including 2008, when Maryland defeated North Carolina in the championship match. * The ACC had five teams selected to the 2010 NCAA Tournament Field of 48 announced by the NCAA Division I Men’s Soccer Committee. * Since seeding began in 1994, the ACC has been awarded the top seed 10 of the possible 17 years. * The ACC has had at least one team in the College Cup Final Four nine consecutive years. * The ACC owns 14 NCAA Men’s Soccer national titles and has appeared in the championship game on 21 occasions. The league recently won three consecutive College Cups (Virginia 2009, Maryland 2008, Wake Forest 2007) and five of the past six crowns (Virginia 2009, Maryland 2008, Wake Forest 2007, Maryland 2005). * In 2008, the ACC became the only league in NCAA Tournament history to place three teams in the same College Cup. And for the first time in NCAA history, the NCAA had two teams from the same conference competing for the national title (Maryland vs. North Carolina, 2008).