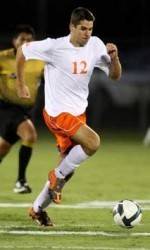 CLEMSON, SC ­ Virginia won the National Championship Sunday as the Cavaliers won the penalty kick round over Akron in the finals of the NCAA Men’s Soccer Cup in Cary, NC on Sunday afternoon. The Tigers are one of only three teams to defeat Virginia this season.

Clemson defeated Virginia 1-0 at Charlottesville, VA on September 26. The Tigers’ Mike Mattson scored a goal late in the first half (40:44) in leading Clemson to the upset victory over eighth-ranked Virginia.

During the 1993 season, the Tigers defeated Virginia 2-1, on October 10, at Charlottesville, VA. Former Tiger All-American Jimmy Glenn scored the winning goal at the 89:59 mark (one second remaining in regulation). This was the latest goal that the Tigers have ever scored to win a match. The Cavaliers won the National Champion that season.

In 2008, Clemson defeated Maryland 5-3 as the Tigers’ Michael Brooks scored four goals on October 3, 2008. The Terrapins won the National Championship in 2008.