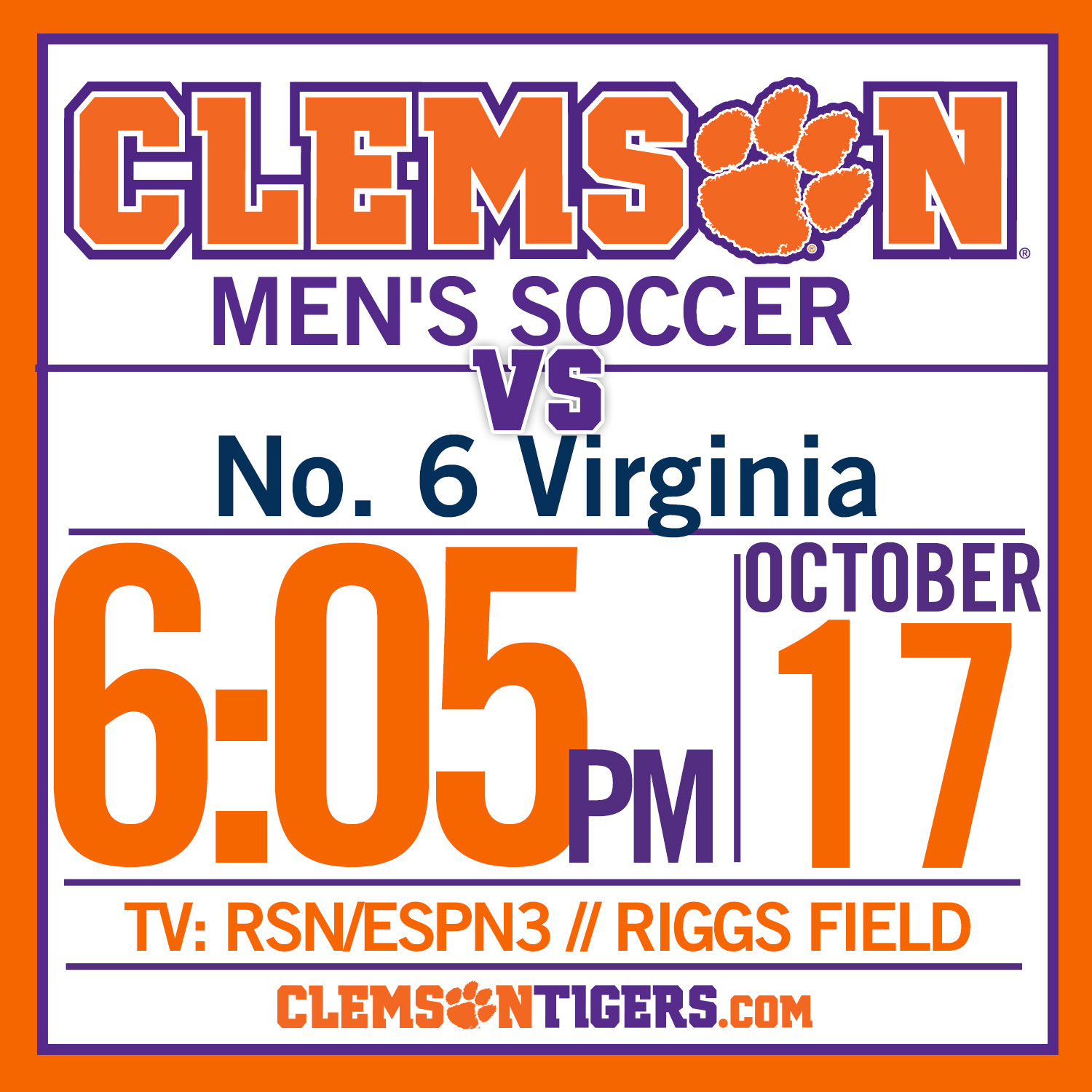 CLEMSON, S.C. – The Clemson men’s soccer team hosts the No. 6 Virginia Cavaliers Friday, Oct. 17 at Historic Riggs Field. The match kicks off at 6:05 p.m. and will be televised on RSN. Tickets can be purchased online through the Clemson Athletic Ticket Office using the link above, or at the gate on gameday.

The Tigers are currently 6-6-0 overall and 3-2-0 in the ACC this season, and currently sit in third place in the ACC’s Atlantic Division. Clemson is ranked 31st in the RPI poll released by the NCAA on Oct. 13. Clemson is coming off a 2-0 win on the road against Pittsburgh on Oct. 11, in which sophomore Austen Burnikel and senior Manolo Sanchez scored, and redshirt junior Chris Glodack earned the solo shutout in goal.

Junior T.J. Casner and sophomore Thales Moreno lead the Tigers with three goals each on the season, while Casner’s 10 points are best on the team. So far this season, 12 different players have scored for Clemson. Redshirt junior Chris Glodack and sophomore Andrew Tarbell have split time in goal for the Tigers. Tarbell has started eight matches and picked up four wins with 17 saves. Glodack has started five matches and saved 24 shots.

No. 6 Virginia is coming off a 1-0 win over Duke on Oct. 11. The Cavaliers sit atop the ACC’s Coastal Division standings, with an 8-3-1 overall record and 3-1-1 mark in conference play. Senior Eric Bird was named ACC Player of the Week on Oct. 14 after he scored two game winning goals for the Cavaliers last week. Virginia is currently ranked No. 6 by TopDrawerSoccer.com, No. 10 by the NSCAA and No. 12 by Soccer America. The Cavaliers are listed seventh in this week’s RPI rankings.

Clemson trails in the overall series with Virginia 23-27-5, however, the Tigers have won the last two meetings. The two teams met last season on Sept. 6 in Clemson, with the Tigers winning 2-0. Virginia was ranked 21st nationally at the time. Ara Amirkhanian scored Clemson’s second goal of the match off an assist from Manolo Sanchez. Chris Glodack picked up the solo shutout win.