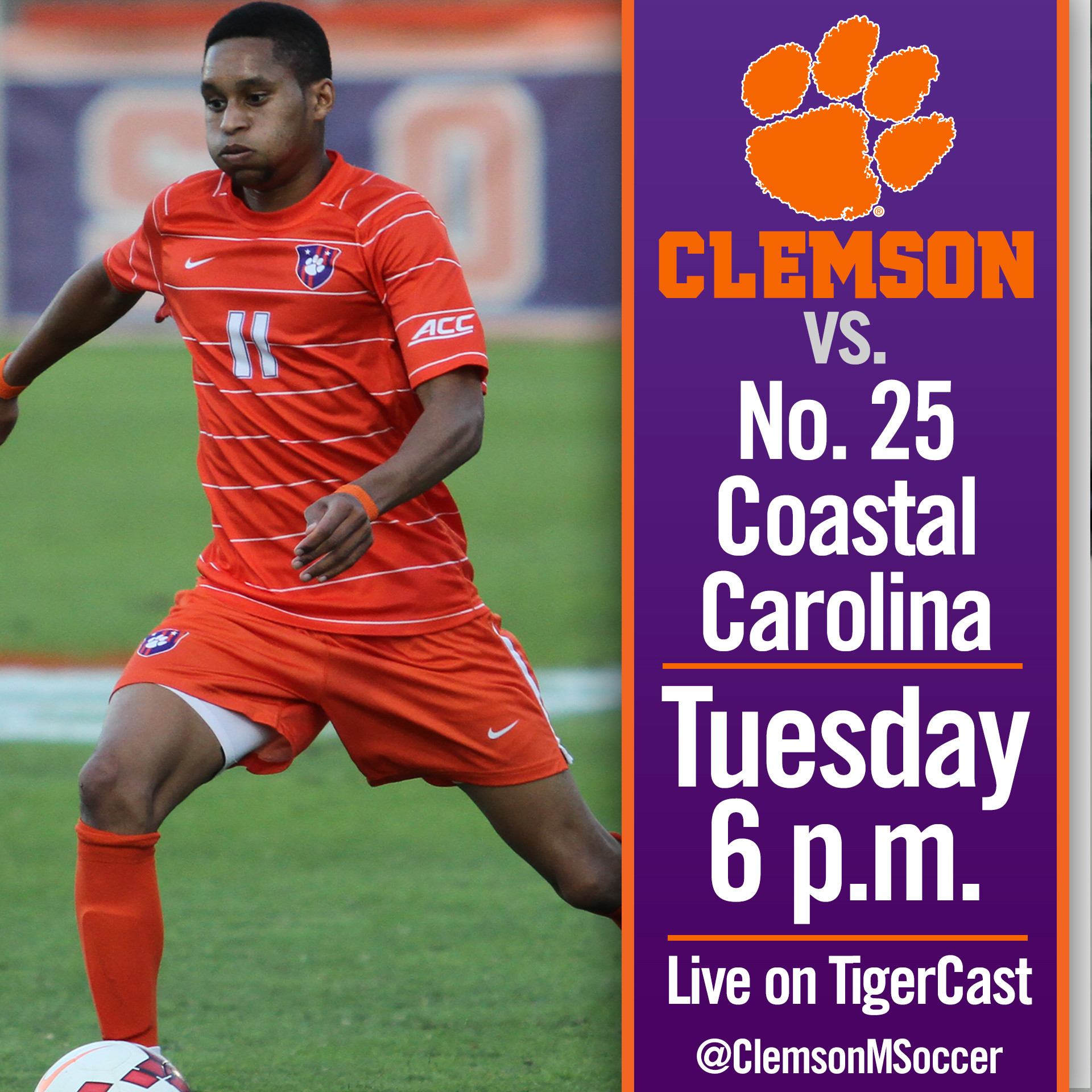 CLEMSON, S.C. – The Clemson men’s soccer team hosts No. 25 Coastal Carolina Tuesday night at 6 p.m. at Historic Riggs Field. The match was originally scheduled for last Tuesday, Oct. 14, but was postponed due to inclement weather. The match will be broadcast live online via TigerCast on ClemsonTigers.com. Tickets can be purchased online through the Clemson Athletic Ticket Office or at the gate on gameday.

The Tigers improved to 7-6-0 overall and 4-2-0 in the ACC with a 2-1 win over No. 6 Virginia Friday night at Historic Riggs Field. Senior Manolo Sanchez and sophomore Austen Burnikel scored for Clemson, and redshirt junior goalkeeper Chris Glodack picked up the win in goal.

Senior Manolo Sanchez’ two goals this season have come in the last two games. His nine total points are second best on the team. His five assists leads the team. Through 13 games, 12 different players have scored a goal for Clemson. Junior T.J. Casner and sophomores Thales Moreno and Austen Burnikel lead the team with three goals apiece. Glodack and sophomore Andrew Tarbell have split time in goal this season. Tarbell has started eight matches and Glodack has started six. Tarbell has 17 saves this season and four wins. Glodack’s .818 save percentage is currently fourth best in the ACC.

Coastal Carolina boasts a 10-3-0 overall record and a 4-0-0 record in the Big South Conference. The Chanticleers most recently knocked off Liberty 2-0. Sophomore Sergio Camargo leads Coastal Carolina in scoring with four goals and 12 points this season. Devin Cook-Perales has started 10 games in goal and saved 33 shots.

Clemson has a 6-2-1 all-time advantage in the series against Coastal Carolina, with all nine matches being played at Historic Riggs Field. The Chanticleers won the most recent meeting between the two teams by a score of 2-1 in 2007, while the Tigers won 2-0 when the teams met in 2005.