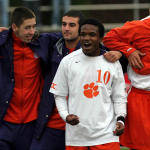 Clemson, SC – Dane Richards scored his 11th goal of the season and Phil Marfuggi recorded his seventh solo shutout, and third straight in the NCAA Tournament, leading Clemson to a 1-0 victory over Notre Dame on Sunday in the third round of the NCAA men’s soccer tournament at Historic Riggs Field in Clemson, SC.

The Tigers now advance to the Elite Eight of the tournament on Friday evening at 7:00 PM when they will play host to Creighton at Riggs Field. Ticket information will be available from the Clemson ticket office on Monday by call 1-800-CLEMSON. It is Clemson’s first trip to the Elite Eight since 2002.

Clemson achieved the victory despite the absence of Head Coach Trevor Adair, who flew to Ireland on Friday to attend his father’s funeral on Monday. Adair will be back on the sidelines for the Tigers on Friday. Scott Calabrese served as acting head coach for the match.

“Hats off to Notre Dame, they are a class program and well coached,” said Calabrese. ” This game could have gone either way.

“Our thoughts and prayers are with Trevor Adair and his family during this difficult situation. We played for Coach Adair, there is no doubt about it. I thought we showed a lot of determination. Our team did a good job, especially with the stakes so high.

“This is Trevor’s second family and I know he was concerned about missing the match. But, he stayed in contact with us during the game.”

Clemson improved its 2005 record to 14-5-3 overall, while the Irish fell to 12-8-3. Clemson has now won eight of its last nine matches, including all three in the NCAA Tournament.

Clemson moves on to the Elite Eight for the 12th time in its history, the fifth time under Trevor Adair. A victory over Creighton would put Clemson in the Final Four for the first time since 1987 when they won the National Championship in a Final Four played at Clemson. Notre Dame was attempting to reach the final Eight for the first time in the 29-year history of the program.

Richards put Clemson on the scoreboard at the 19:52 mark of the match. He took a pass from Bryson Moore, eluded Notre Dame goal keeper Chris Cahill 25 yards from the goal on the left side, then shot into an empty net from 15 yards away, giving the Tigers a 1-0 lead.

It was the 11th goal of the year for Richards, who has scored more than twice as many goals as any other Clemson player this year. The junior college transfer has scored a goal in 10 different games this season and the Tigers have won all 10 matches. He has scored one goal in seven of the last nine Clemson matches, including each of the three NCAA Tournament games. He is the first Clemson player to score a goal in three consecutive NCAA Tournament matches since Bruce Murray had four-match goal scoring streak in 1987.

Clemson had two more attempts to put the game away in the second half, both opportunities created by Richards. Near the midpoint of the second half he beat the Irish goal keeper from the right side and fired a shot from an acute angle that hit the left post, then bounded across the goal mouth without crossing the goal line and hit the right post before a Notre Dame defender knocked the ball away.

With 10 minutes left Richards threatened again when he kicked the ball high over Cahill’s head from 40 yards out. Only a great save by Notre Dame defender Dale Rellas, who headed the bouncing ball over the goal prevented Clemson from scoring a second goal.

Notre Dame had its chances to score but the most dramatic took place with just 30 seconds left when Justin McGeeney and Clemson goal keeper Marfuggi raced for a lead ball just 25 yards out in front of the Clemson goal. Marfuggi won the race and took possession of the ball with both hands thanks to a diving play, ending Notre Dame’s final threat.

Marfuggi has now registered a shutout in all three NCAA Tournament matches, the first Clemson goal keeper to do that in the NCAA Tournaments since Dennis Carrington in 1973. Earlier in the tournament, Marfuggi and the Tiger defense shut out Coastal Carolina 2-0 and NC State, 3-0.

“Our defense makes it easy for me,” said Marfuggi. “They are very focused and playing very well. Although Notre Dame had a lot of possessions, they did a great job today. We try to play hard every game, but we were extra motivated today to play for Coach Adair.”

Clemson is now 8-15 in all sports against Notre Dame, but 2-0 in men’s soccer. Clemson also defeated the Irish in a regular season game in Greenville, SC in 2001, 4-0.