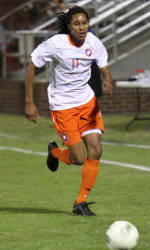 SPARTANBURG, SC – Amadou Dia scored with 15:17 left in regulation to lead the Tigers to a 1-0 victory over Wofford in a men’s intercollegiate soccer match at Spartanburg, SC Monday night.

Clemson scored in the 75th minute. Austin Savage dribbled down the center of the field. He crossed the ball to Dia at the top of the box. Dia fired a left-footed shot just inside the right post for his fourth goal of the season.

“It was a great feeling getting back on the field,” said Dia. “I saw the goalkeeper lean to his right so I shot to his left and it went in near the right post.”

Dia, who missed the Maryland match with an injury, came off the bench and played most of the second half.

“I thought we played better in the second half after we figured out what Wofford was doing in the first half,” said Clemson Head Coach Mike Noonan. “We responded well after the win over Maryland. I thought Bastien Bacro-Duverger played well tonight. This team is a very coachable team. Playing a man down Friday night and coming back and playing Monday night shows that this team competes hard. I am very proud of them. In sports, it’s hard to come back and play after an emotional win. I thought we handled it pretty well. I also thought Keegan Priest had a good match tonight. I think we can learn from this, and realize how important it is to play consistent.”

Clemson will play at Virginia Tech in Blacksburg, VA on Thursday evening in the last regular season match for the Tigers before the ACC Tournament next week.