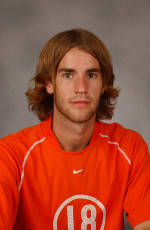 Winthrop scored first in the 52nd minute. Daniel Revio scored his ninth goal of the season with an assist by Otto Loewy.

The Tigers tied the score 1-1 at the 53:33 mark when Brooks scored on a header from eight yards out. Hector Quintanar served the ball to Brooks from the middle for his seventh assist this season.

Brooks scored again at the 74:02 mark on an unassisted goal. Brooks picked up a loose ball in front of the goal and sent a 12-yard shot to the back of the net.

“This was a great atmosphere,” said Clemson Head Coach Trevor Adair. “It was a great crowd and Winthrop has a superb facility. Winthrop is one of the best teams we have faced all year. I am happy to get the win and I am proud of our guys in hanging in and fighting hard for the win. Michael Brooks is a great kid. He plays hard and I am so happy for him scoring the two goals. He works hard and it paid off for him tonight.”