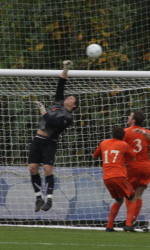 CLEMSON, SC-Nathan Thornton scored both goals in leading Clemson to a 2-0 win over Virginia Tech in the first round of the 23rd annual Atlantic Coast Conference Men’s Soccer Tournament at Cary, NC Tuesday afternoon. With the win, Clemson improves to 6-11-1 overall, while Virginia Tech falls to 5-12-2 this season. Clemson is seeded ninth and Virginia Tech is seeded eighth. The Hokies defeated Clemson 4-2 at Clemson on September 20.

The Tigers will play #1 seeded Wake Forest Wednesday afternoon at 5:30 p.m in the quarterfinal round. The Demon Deacons are ranked third nationally. Wake Forest has a 13-3-2 record overall this season. Clemson has not won an Atlantic Coast Conference Tournament match since November 9, 2005 when the Tigers defeated Virginia in the quarterfinal round.

Clemson scored at the 64:07 mark. Austin Savage crossed the ball from the right. Thornton scored from the left as he sent a diagonal shot into the left wall of the net. It was Savage’s third assist this season.

Thornton, a senior, scored on an unassisted goal in the 87th minute. Thornton obtained possession on the right side and beat a defender on the right flank. He dribbled in the box and sent a diagonal shot into the netting for his second goal of the day and eighth of the season.

“I’m very happy that we won,” said Thornton. “I didn’t want my career to end today. Things fell our way today. It was a complete team effort. This team shows a lot of character, we didn’t give up.”

Coach Hindson was also very happy with the outcome of today’s game. “We played hard and battled well today. We never quit, it’s been that way all season. We must now prepare for Wake Forest, and we’ll try to give them our best shot.”

Virginia Tech outshot the Tigers 15-12, and won the battle of Corner Kicks 12-5. Clemson’s Joseph Bendik had five saves and the Hokies’ Stefan Caulfield had four.