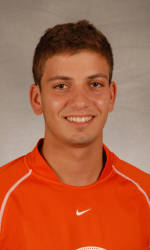 CLEMSON, SC – Hassan Ibrahim scored two goals and assisted on the other in leading Clemson to a 3-2 overtime win over Virginia Tech in a men’s Atlantic Coast Conference soccer match at Clemson, SC Sunday afternoon.

Virginia Tech scored first in the eighth minute of play. On a give and go, James Gilson passed the ball to Clarke Bentley. Bentley immediately sent the ball back to Gilson who lifted a left-footed shot from 17 yards out to the right corner of the goal. It was his first goal of the season.

Clemson tied the score with 1:12 left to go in the first half. David Newton sent a long pass from the back to Ibrahim. Ibrahim ran under the ball and after one bounce, fired a looping shot from 19 yards out from the right corner of the box to the center of the goal. It was Ibrahim’s first goal of the season.

The Tigers took the lead at the 81:22 mark (8:38 left to go in the match) Ibrahim sent the ball to Riley Sumpter on the right. Sumpter crossed the ball to Burton who knocked the ball in from six yards out. This was Burton’s first goal of the season.

The Hokies tied the score 2:34 later. After a flury in front of the goal, Craig Burnell centered the ball. Brendan Dunn who was on the ground knocked the ball into the goal with his left foot for his first goal of the season.

In the second overtime period at the 102:18 mark, Bryson Moore sent a pass from the left side to the left corner of the box. Ibrahim sent a looping shot to the right corner of the goal for the match winner. This was his second of the game and the second goal of the season.

“I saw the keeper play up and come out,” said Ibrahim on the winning goal. “I decided to shoot rather than to close in and I got lucky and was able to score the goal.”

“This was a nice win for our team,” said Clemson Head Coach Trevor Adair. “I give our guys credit. They showed a lot of character. They never gave up and they have been working hard and getting better. It’s taken a while and we still have a ways to go. This game was a battle of young players on both sides. It’s great that we found a way to win. We now have to move forward and prepare for Duke. I have to give our trainer, Jerome Razayeski a lot of credit for keeping everyone healthy and ready to play. Nick Burton played well and he earned his playing time today by doing a great job in practice this week. He did what we asked today. I’m really proud of the team, and they found a way to win this match.”

Clemson will play at Duke on Friday night in Durham, NC in the Tigers’ next action. Match time is set for 7:00 p.m.