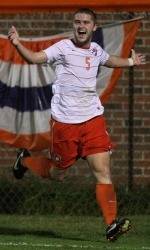 BLACKSBURG, VA – Austin Savage scored one goal and assisted on the other in leading Clemson to a 2-1 victory over Virginia Tech in an Atlantic Coast Conference men’s soccer match at Blacksburg, VA Thursday night.

Clemson scored early in the match during the seventh minute of play. Brynjar Benediktsson sent a free kick in the box. Austin Savage headed the ball to Bacro-Duverger who fired the ball in the netting for his first goal of the season.

The Tigers went up 2-0 late in the match at the 84:14 mark. Austin Savage scored his sixth goal of the season when he sent a 30-yard shot from the middle of the field. Iain Smith was credited with the assist.

Virginia Tech scored 2:21 second later, with only 3:25 left to go in regulation. Kevin Reitzel scored off a deflection in the middle for his first goal of the year.

“We played exceptionally well in the first half,” said Clemson Head Coach Mike Noonan. “It’s unfortunate that we only scored one goal. They made it more difficult in the second half, and we defended well. Austin Savage scored one of the most beautiful goals you are going to see in college soccer. They scored late, and we held on to win. I am very proud of this team.”