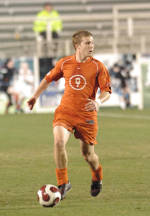 Clemson scored early in the match, Tommy Drake sent a pass down the left side to Eric Cava who sent a six-yard shot into the netting.

The Tigers scored again in the 33rd minute as Priest took a shot from 16 yards out. His shot was blocked and the ball trickled to Austin Savage. Savage sent a 14-yard shot into the goal to give Clemson a 2-0 lead.

Clemson scored in the 74th minute as Mike Mattson scored from 14 yards out with assists by Savage and Drake.

Drake completed the Tigers¹ scoring as he converted a penalty kick at the 80:23 mark in the match.

USC Upstate scored with 1:15 left to go in the match. Nick Buxton scored with an assist by Ben Brannan.

“I was very happy with our performance tonight,” said Clemson Head Coach Phil Hindson. “I was happy with our ball movement, patience, and fitness. I thought we responded well after our lost last weekend to Alabama-Birmingham. That game¹s result was not indicative of this team and how well we can play. One or two mistakes really changed that game around last week. But tonight, I thought we played well. We need to keep working on the final ball and develop a killer instinct. I think we learned a lot from our mistakes in the defeat and that showed tonight,” said Hindson.