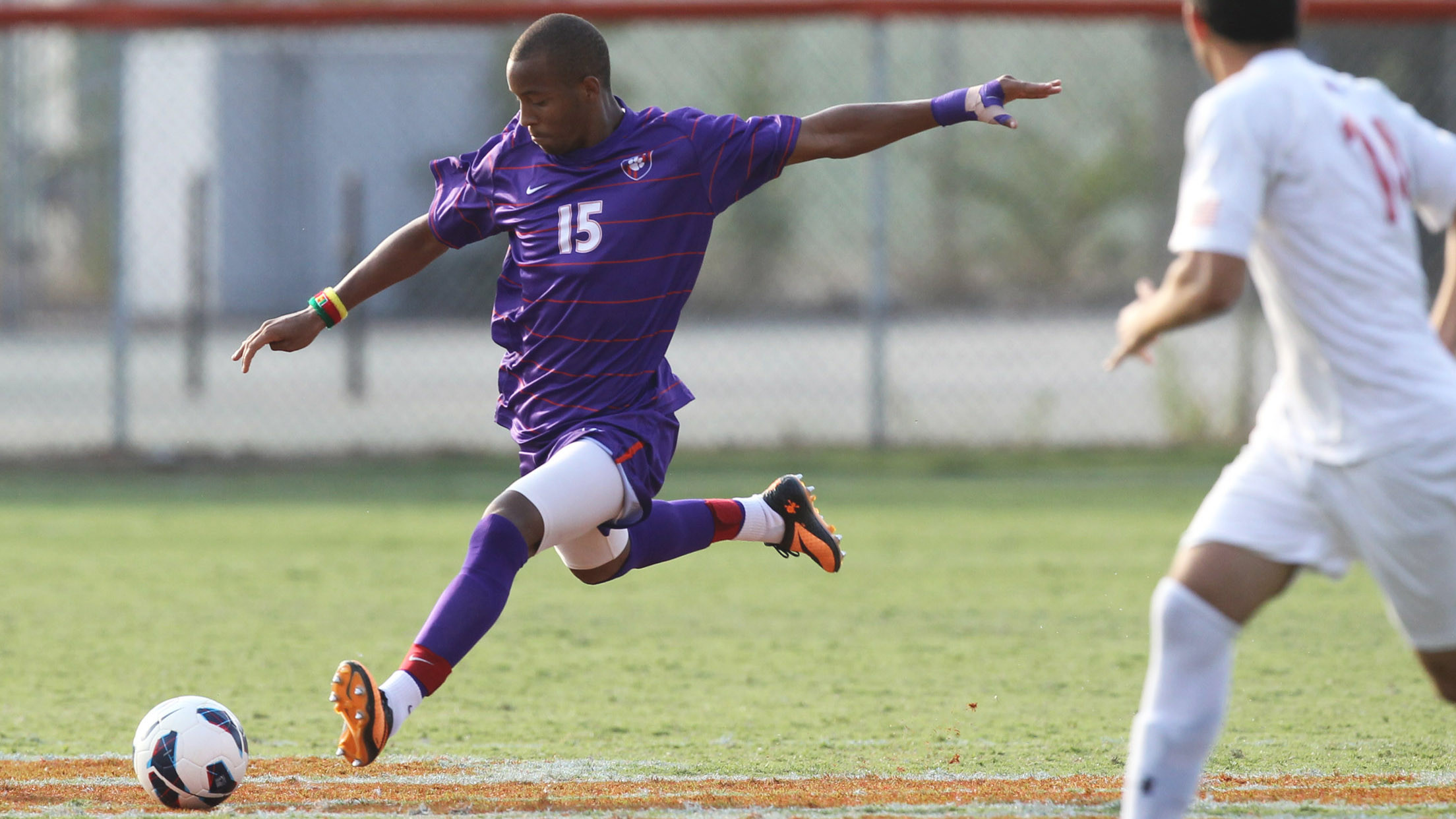 CLEMSON, SC – Thomas McNamara scored one goal and had an assist in leading Clemson to a 3-0 win over Gardner Webb in a men’s intercollegiate soccer match at Clemson, SC Sunday evening.  With the win, Clemson stayed unbeaten at 4-0 while Gardner-Webb falls to 2-2 on the season. McNamara is Clemson’s leading scorer this season with four goals and two assists for 10 points.  He is a graduate student at Clemson having played three years at Brown. The Tigers scored their first goal in the 24th minute of play.  On a free kick, McNamara sent a shot curving over the Gardner-Webb defensive wall and into the goal on the ground just inside the right post to give the Tigers a 1-0 advantage. Clemson scored again in the 29th minute of play.  Iain Smith went driving into the box on the right side.  At the corner of the goalie box, he crossed the ball to the left.  Teammate Ara Amirkhanian was there and ran onto the ball, sending a six-yard shot into the netting just inside the left post for his second goal of the season.Clemson took 10 of their 13 shots in the second half, six of these in the second half were on goal.Clemson had a chance to score midway in the second half.  Thales De Mello Moreno sent a pass to TJ Casner in the box.  Casner turned and shot from 10 yards out, but the Gardner-Webb goalkeeper, Matthew Swan made the save above his head and kept the Tigers lead to 2-0.With 15:00 left in the match, The Tigers’ Manolo Sanchez took a shot from 14 yards out from the right, but Swan was there and covered the ball to prevent any further scoring.The Tigers threatened again with 12:51 remaining in the contest.  On a free kick, Clemson’s Thales De Mello Moreno took a left-footed 22-yard shot that curved inward, but the attempt was saved near the right post by Swan.The Tigers completed their scoring in the 81st minute of play.  McNamara crossed the ball from the right.  His pass skipped through the box to Alexandre Rome’o Happi near the left post.  Happi one-stepped the ball and sent a 10-yard shot into the middle of the goal for his first tally of the season.“I thought we approached this game with a very professional attitude,” said Clemson Head Coach Mike Noonan.  “We were focused and did not have a letdown.  After a big match with Virginia on Friday night, we came into the match today very focused and were prepared mentally.”“It was a great team effort,” said Noonan.  Thomas McNamara had another great game.  I thought our defense played well and earned another shutout against a much-improved Gardner-Webb team.  We will work hard this week and prepare for N.C. State.”For the game, Clemson outshot Gardner-Webb 13-8.  The Tigers took 10 shots in the second half.  Andrew Tarbell started in goal for the Tigers.  Swan was in goal for the Runnin’ Bulldogs and made four saves.Clemson will play N.C. State in Raleigh, NC on Saturday in the Tigers’ next action.Clemson 3, Gardner-Webb 0