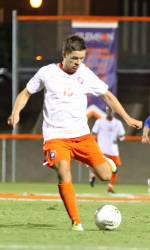 | Benediktsson, Tigers Enjoying the Taste for the Dramatics

CLEMSON, SC – Bryniar Benediktsson scored with only :10 seconds left in the second overtime period in leading Clemson to a 2-1 victory over Gardner-Webb in a men’s intercollegiate soccer match at Clemson, SC Tuesday night.

Benediktsson now holds the Clemson record for the latest goal scored in an overtime period with time constraints with only :10 seconds remaining. He set the record with his performance against N.C. State last Friday.

The latest goal scored in regulation to win a match was Jimmy Glenn’s goal at the 89:59 mark against Virginia as he led the Tigers to a 2-1 win over the number-one ranked Cavaliers on October 10, 1993, in Charlottesville Virginia.

The latest Clemson goal ever scored without time constraints was Henry Abadi’s goal at the 139:12 mark as he led the Tigers to a 1-0 win over South Florida on December 2, 1973 in a NCAA Tournament match.

Benediktsson scored twice tonight and Jack Metcalf assisted on both of the goals.

Clemson scored the first goal at the 36:39 mark. Jack Metcalf played a ball to Benediktsson from the middle. Benedikttson fired a shot from eight yards out to give the Tigers the lead.

Gardner-Webb tied the score with :52 seconds remaining in regulation to force overtime. Eric Asanin-Miroux sent a through ball to the middle to Denzel Clarke. Clarke fired a 16-yard shot to the left corner of the netting for his first goal of the season.

In the second overtime period with only :10 seconds remaining (109:50) Jack Metcalf played a through-ball to Benediktsson. The Gardner-Webb goalkeeper Scott Krotee charged out and Benediktsson sent a slow rolling ball from 18 yards out that just went inside the right post for his fourth goal of the year.

“I was surprised when the goalkeeper charged out,” said Benediktsson. I was fortunate to send the ball around the goalkeeper and into the goal. Tonight was good for the audience, but frustrating for us. We never gave up, and this should help our confidence.”

“Games like this are what ages a coach,” said Clemson Head Coach Mike Noonan. “Last year we would have lost a game like this 1-0, this year we are finding ways to win. This team does not quit. I’m happy for the team, but I have deep concerns. This is a very young team, and we still have a lot of work to do.”