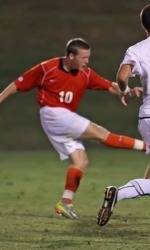 GREENVILLE, SC – Nick Burton scored the match’s only goal in leading Clemson to a 1-0 overtime win over Furman in a men’s intercollegiate soccer match at Greenville, SC Wednesday night.

With the win the Tigers are now 1-3-1 overall, while Furman drops to 4-3 this season. This was the third overtime match for Clemson this season.

In the first overtime period, during the 94th minute of play, K.C. Onyeador in the middle of the box. Onyeador took a shot and the ball was cleared by a Furman defender. Burton gathered the ball near the left corner of the box and made a move to his right and sent a 15-yard shot to the right wall of the netting to give the Tigers the 1-0 victory. It was Burton’s first goal of the season.

In the first half, Furman had a 5-2 advantage in shots including a shot by Fabien Vorbe that hit the cross bar from 15 yards out in the 16th minute of play.

The other serious Paladin attempt occurred in the 18th minute as Vorbe sent a 25-yard shot toward the frame but it was saved by Clemson goalkeeper Cody Mizell.

In the second half in the 49th minute, Clemson had a direct kick at the top of the box after a Furman foul. Austin Savage’s shot went wide of the left post.

In the 56th minute, Furman’s Dane Roberts sent a hard diagonal shot from the right from 18 yards out that was saved by Mizell.

Midway in the second half with 25 minutes left to go in regulation, Clemson’s Metcalf crossed the ball from the right. Savage’s head shot went over the cross bar as the match remained scoreless.

Clemson again threatened with 7:34 left to go in regulation as K.C. Onyeador dribbled down the left side. He crossed the ball to Tommy Drake who sent a shot toward the right post, but Furman’s goalkeeper Alex Kann was there to make the save.

“The team came together tonight,” said Clemson Head Coach Mike Noonan. “Our fitness level is very high and our commitment level is very high. We showed a lot of character. We did not concede tonight or at Virginia Tech last Friday night. That’s two straight matches that went into overtime and we have recorded two shutouts. Matt Erasmus had a great game tonight. Jack Metcalf played fantastic. Franklin Blaise and Alex Stockinger did well as did Cody Mizell in goal. The team played very well tonight, and I am so happy for them.”

Nick Burton was also very excited for the team. “The ball came out to me after the first shot by K.C.,” said Burton. “I settled the ball down to my left foot. I faked a shot and switched the ball to my right I saw an opening and took the shot and it went in near the right post. I am so happy for our team. This is a confidence builder. We have worked hard, and we have kept our heads up. I am just happy for the team.”

Furman finished the match with 11 shots while Clemson had eight. The Tigers had two shots in the overtime period. The Tigers had six corner kicks compared to the Paladins 4.

Both goal keepers, Mizell of Clemson and Kann of Furman both finished the match with two saves each.

Tonight marked the 51st meeting between the two schools on the soccer field. The series was started in 1934. Clemson and Furman played in the first intercollegiate soccer match in the state of South Carolina.

Clemson will play host to Virginia on Saturday night at 7:00 p.m. at Historic Riggs Field in the Tigers’ next action.