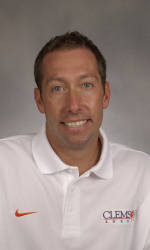 Calabrese, a former professional soccer player who has coached at the collegiate and pro levels, will direct a program that begins to compete at the club level in the fall of 2007, before entering Atlantic Sun Conference competition as a scholarship program during the 2008 season.

“We are pleased to have a coach with Scott Calabrese extensive experience and credentials join the university to lead our new men’s soccer program,” Stanton said. “This is an exciting time for ETSU athletics on so many fronts, and the men’s soccer program will be a part of our successful future.”

A 1994 graduate of Bryant College, Calabrese has spent the past four seasons helping guide the Clemson Tigers to the top of the national rankings, including a trip to the NCAA Final Four in 2005 and a No. 1 national ranking midway through the season. With duties that range from recruiting to player development to general internal operations, Calabrese also directed the Clemson Soccer Academy, which plays host to over 1,800 children each summer.

Prior to his time at Clemson, Calabrese coached on the college level at the University of North Carolina from 2000-2001, helping the Tar Heels to an Atlantic Coast Conference championship and Elite Eight appearance in 2000, and then to a national championship in 2001. He also spent two seasons in the Atlantic Sun Conference, assisting at Stetson University from 1998-99.

On the professional level, Calabrese was an assistant coach for the Carolina Courage of the WUSA, working to advance that franchise from “worst to first” and winning a 2002 WUSA title. He played professionally for the Rhode Island Sting Rays from 1995 to 1997, as well as the South Carolina Shamrocks in 1999.

Mullins said ETSU was looking for a head coach with experience at the nation’s top programs and who has a vision to build a highly successful team at ETSU. According to Mullins, Calabrese fits the criteria.

“As one of only two Division I men’s soccer programs at public institutions within Tennessee, we believe this gives us a chance to build a quality program in a sport that certainly has its niche,” Mullins said. “Along with our women’s program and a new facility on campus, men’s soccer will make an immediate and major impact on the direction of our program. Under Scott’s direction, ETSU men’s soccer can become a successful program both at the conference and national levels.”

Calabrese said he is happy to join the ETSU family and eager to get to work.

“It is truly an honor to be named the first head men’s soccer coach in the history of ETSU,” Calabrese said. “The vision of the university, the athletic department and the community shows a deep commitment to the future of ETSU and the region. I am excited to be a part of this growth and look forward to building a team that brings a sense of pride and tradition to ETSU, as well as the local soccer community.”

Additional Calabrese quotes: “It is my goal to build the men’s soccer program at ETSU into a dominant force in the Atlantic Sun Conference and to compete with the best teams in the South Region. I am excited and honored for the opportunity and can’t wait to get to work.”

“The growth of youth soccer and the improvement in the overall level of talent in Tennessee is very appealing to my vision for our soccer program. It presents a great opportunity for the Elite players of Tennessee to continue to develop in a highly competitive Division I atmosphere and receive an education from one of the best institutions in the region.”