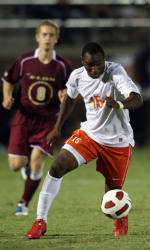 Clemson and Wofford Play to a 2-2 Tie

CLEMSON, SC–Clemson and Wofford played to a 2-2 overtime tie in a men’s intercollegiate soccer match at Clemson, SC Wednesday night.

Clemson now has a 4-7-4 record overall, and Wofford has a 2-9-3 ledger this season. This was the eighth overtime game for the Tigers this season, one shy of tying the school record of nine ties set in the 2002 season.

Wofford scored in the 14th minute of play as Billy Padula sent a pass from the midfield to Wilson Hood setting up a one-on-one situation with the Tiger goalkeeper J.D. Spearman. Wilson dribbled in the box and sent a diagonal shot from the left to the right corner of the net for his fifth goal of the season.

Clemson tied the score before intermission in the 39th minute. Tommy Drake. Drake rifled a shot in the net from the right side for his fourth goal of the season.

The Tigers’ Nick Burton attempted a 24 yard shot from the left side that went just high over the cross bar with :20 seconds left before halftime.

The Terriers took a 2-1 lead in the 56th minute as Armin Kinigadner sent a 35 yard shot that hit the crossbar and bounced over the line for his second goal of the season.

Clemson tied the score in the 75th minute as K.C. Onyeador. He sent a diagonal shot just inside the box from the right that curved inside the right post for his fourth goal this season.

In the first overtime period, Clemson’s Austin Savage sent an 18-yard shot just over the goal in the 95th minute. With just 1:28, left Savage tried another shot just inside the box in the middle, but the Terriers’ goalkeeper Andrew Drennan was there to make the save.

During the second overtime period, Wofford’s Armin Kinigadner took a 24-yard shot in the 104th minute, but it was saved by the Tigers’ Eric Cava attempted a 12-yard shot that went wide with 4:43 left to go in the period.

“It’s the same story,” said Clemson Head Coach Mike Noonan. “It’s our finishing, lack of intensity and consistency. Give Wofford credit they played a great game. We lacked focus and concentration. We had a mental letdown in the back that caused a goal. We had to chase the game tonight. With that said, I am proud of the players for coming back twice and they refused to lose. Old habits die very hard. Our mentality has to improve as well as our consistency. We must now prepare for N.C. State.”

Clemson will play host to N.C. State on Sunday, October 31, in the Tigers’ last home match of the 2010 season.